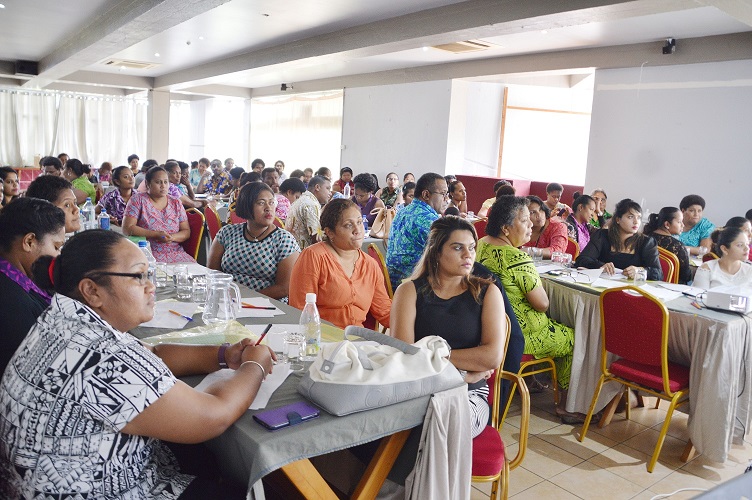 Nurses and health professionals from the Central division and Ra Medical Subdivision attend the two-day training on the administration of the Men-C vaccine that starts in the two divisions on Monday, May 14. Picture: SUPPLIED

SIXTY nurses from the Central Division and the Ra Medical Subdivision in the West who will be involved in the Men-C vaccination campaign attended a two-day training this week to acquaint themselves with the finer details of the vaccine and the operational plan.
The training began in Suva on Monday as the ministry prepares to roll out the vaccination program.
Ministry of Health National Advisor Family Health Dr Torika Tamani said the training would also empower nurses and health professionals on how to strategise on the operational plan for conducting this mass immunisation campaign.
“In terms of the participants, we are having nurses from the Central Division, including Ra Medical Subdivision in the Western Division. As we progress with the rollout of the Men-C vaccine, we will also conduct similar training for the Western, Northern and the Eastern teams,” Dr Tamani was quoted saying in a Government statement issued yesterday.
“Discussions focussed on conducting vaccinations through schools and health facilities. Those children outside school settings can get vaccinated at the health facilities.
“Estimated number of students to be vaccinated would be around 110,000 from primary and secondary, kindergarten, special schools and private schools based within the central and Ra subdivision.
“We have chosen vaccination in the Central Division and Ra subdivision based on the prevalence of the current outbreak of Men-C. We need to also use the 124,000 doses so it can free up the cold chain space for the next batch of the 200,000 doses that will be arriving later in the month.”
The mass immunisation campaign is in response to the outbreak and an effort to control the spread of meningococcal infection in Fiji; targeting children from the ages of 1 year to 19 years.
The vaccination campaign will commence from next Monday, May 14 in the Central Division and Ra Subdivision.
The Men-C vaccination campaign will continue throughout all the other divisions until the vaccination of all children within this age group is completed.