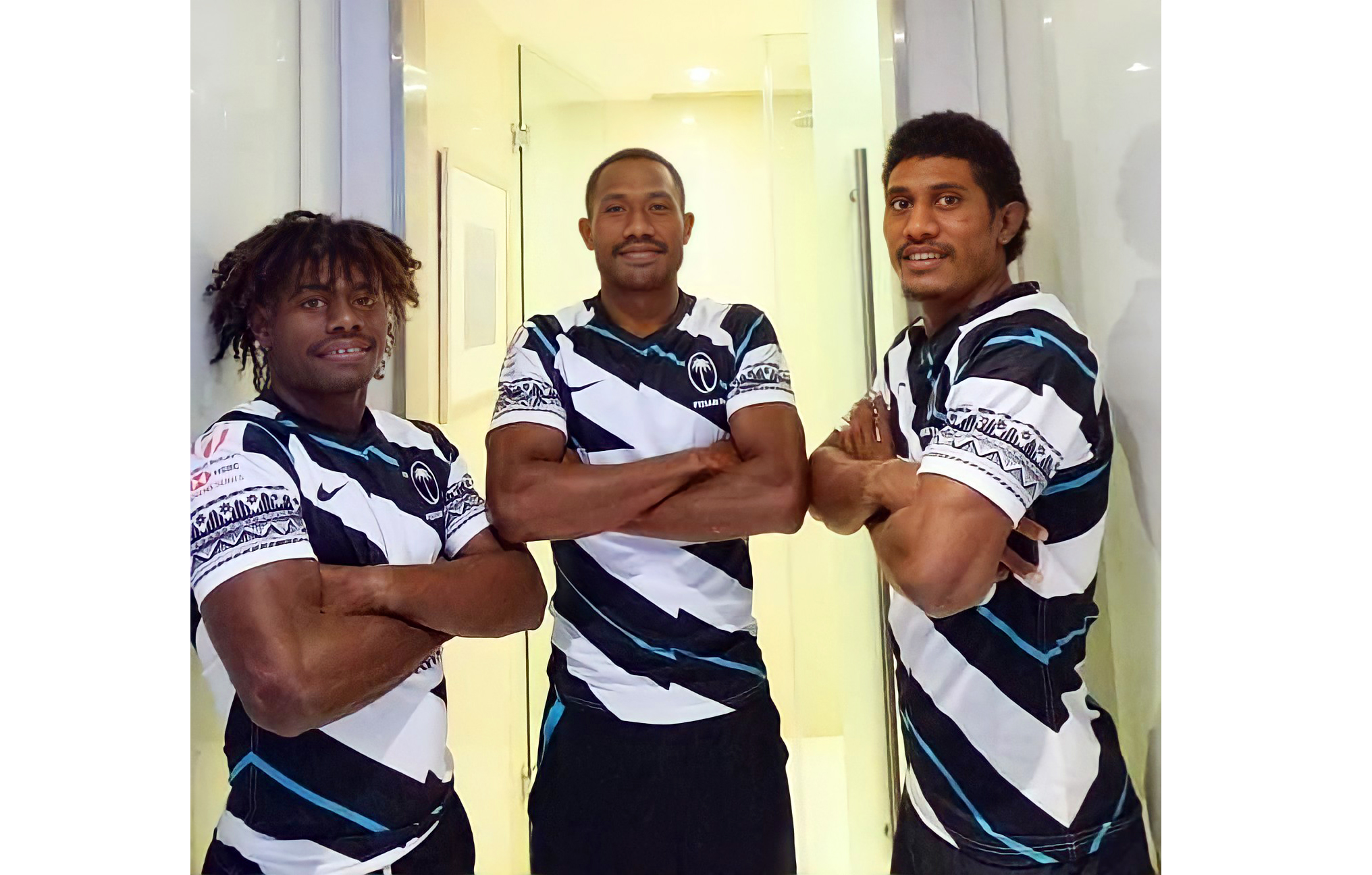 The village of Nukubalavu is located close to Savusavu Airport. A peaceful village, it is home to some of our famous rugby and football players.

For many, farming and fishing is the way forward.

The youths in Nukubalavu love sports, and apart from farming they dream big.

The selection of Flying Fijians halfback, Frank Lomani into the Fiji team paved the way for the youths to take up rugby as an opportunity to fulfill their dreams of representing Fiji on the international stage.

Hence, since their sons have donned the 7s jumper, Nukubalavu has been in a state of frenzy as the villagers look forward to this weekend’s Dubai 7s.

On the other hand, Raiwasa Taveuni team coach Seba Vulakoro was elated as four members of his side made the cut for the Dubai 7s.

Coach Seba, who found it hard to control his emotions, attributed their selection to the hard work of the players, and that they had set a platform for the other young boys in the island.

The Raiwasa Taveuni team delivered a powerful and phenomenal performance at the final leg of the 2021 Super Sevens Series held at the ANZ Stadium despite losing to Police Blue 14-0 in the final.

The side finished second on the points table and collected $10,000 for their efforts.

Speaking to Paulini Curuqara (FT: 15/11), Raiwasa Taveuni coach said, “Hats off to the boys, these are all grassroots level boys, going through the tough core of training.

“From being farmers and rising up to this level, they have really shown Fiji what God made them for. They have the talent to represent Fiji, and it is their own hard work that got them a spot in the national team.”

Farming was the way forward for the trio.

There were a lot of challenges and obstacles on the way, but these were brandished by the family support and love.

It has been a difficult journey for the boys to stay away from their families, but this separation drove them to fulfill their goals.

The pace and intensity of the training program was different from what they went through when they played for their clubs.

She added that Iowane Raturaciri, Iowane Teba and Daniele Yaya had shone throughout their matches.

She threw some light on the players’ background, and the feelings and emotions that Nukubalavu experienced over the weekend.

Teba’s mum, Filomena Diravu, who is 65-years-old, attributed his success to God’s faithfulness.

She shared, “Only God knows our struggles and the difficult days we lived over the past years.

It wasn’t easy, but we never doubted God’s faithfulness, and I have always believed that he kept his eyes on us knowing that as a widow and mother to my children, I stayed true to my duties.”

Losana Vula, Raturaciri’s mother, advised her sons to remain honest, humble and obedient, in order to succeed in life.

She shared, “I stayed true to God, and he has fulfilled my dreams for my sons, all my tears shed over the past years where I never thought of giving up, has been paid off.”

Anaseni Yaya said her only child, Daniele, had been a great blessing to them.

Eneriko Kinilovo Raturaciri, who is Iowane Raturaciri’s brother, shared that the boys love playing marble, and when they got a call to join the 7s side, they were playing their favourite past time game.

He added that their favourite uncle was Jone Vuwai, a former football rep, with whom they loved to spend time.

Nukubalavu has been a dominant force in sports, and has gifted players like Pete Maneke (Kadrai), Tony Asesela, Cliffton Charles, Adre Nawaqavou, Beato Raturaciri, Jope Koroi and Jone Vuwai (better known in the Hidden Paradise as Jone Boto)who played for the Savusavu football team under the leadership of the late Surendra Rama.

The Nukubalavu side was feared in local league, and made their presence felt at Narains Park.

The souvenir piece that the fans in Nukubalavu wore over the weekend was red in colour and this symbolised the colour of St Theresa’s jersey.

This week the fans will be wearing white and black.

Frank Lomani played a major role in their success.

His selection into the 15s team made the boys believe in themselves, and although he was miles away from the trio, he guided and showed them the path. 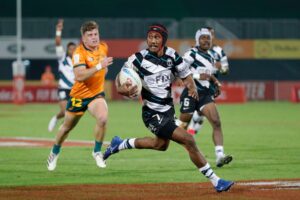 He attended Nasavusavu Public School and St Bedes College. He played for St Theresa and Dominion Brothers before joining the Raiwasa Taveuni side.

He started his career as a farmer.

His selection delighted his family, and his mum and dad, Losana Vula and Beato Raturaciri, were emotional.

They shed tears, seeing their son play in Dubai. It was a dream come true for Iowane, who used to tell Lomani that one day he would fl y in a big plane.

Lomani’s advice for Iowane was to work hard on the rugby field.

The whole village was waiting for the announcement, and when Iowane’s name was announced, people danced, hugged and celebrated.

The common slang was ‘From farm to Dubai’. The best moment for the family was when Iowane scored the winning try against Australia in our final pool match, and photos flooded social media.

In Savusavu town, everyone kept talking about Iowane’s try.

Iowane went up to year 12, but his sacrifice and hard work had paid off.

He is set to return with beautiful memories from Dubai, and aims to win the Melrose Cup and the Commonwealth Games 7s gold medal.

Dad Beato still feels like he woke up from a dream.

Yaya dedicates selection to his parents

Daniele Yaya, who made his first trip on a plane, was emotional as his name was announced.

His mind went back to his village as he recollected the struggles his parents, Petero Yaya and Anaseini Yaya, went through.

A young boy who was just enjoying life in the Hidden Paradise, Yaya was lost for words, but he was adamant of achieving something in life.

He had to give up things to help his parents as life back in Savusavu was a struggle.

It was through his faith and hard work that he managed to get a pair of boot and his training gear.

His cousin, Frank Lomani, kept pushing, motivating and encouraging him to chase the white jumper, and Yaya decided to join the Raiwasa Taveuni team.

He managed to collect enough money for his boat fare, and joined the Raiwasa team.

He had always dreamt of donning the national 7s jumper as he watched our boys in action.

He was injured, but his faith prompted him to move on with life, and his sterling performance for the Garden Island team got him a ticket into the plane to Dubai.

Yaya, who attended St Bedes College, was part of the Fiji U20 trials in 2016, alongside Frank Lomani.

His dad, Petero, who was the sole breadwinner in his family and had retired from Cousteau Resort, and just as he was pondering about life after retirement, the son broke into the national 7s team.

His son had fulfilled his parents’ dream of seeing him play in Dubai.

While sharing his experiences with Paulini Curuqara (FT: 26/11), Iowane Teba said, “I never thought I will be chosen to play for Fiji. 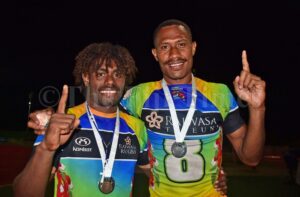 Raiwasa Taveuni reps Daniele Yaya, left, and Iowane Teba after the final tournament of the 2021 Fiji Rugby Union Super Sevens Series held at the ANZ Stadium in Laucala Bay, Suva. The duo were both named in the 15-member national sevens squad for the HSBC Dubai 7s tournament in December. Picture: JONACANI LALAKOBAU

“I spent my whole life in the village helping my family. To be given the chance to represent my country by playing the sport that I love, is a blessing in disguise.”

“Without the support of my family, I wouldn’t make it.”

“God has different plans for us. We, the Taveuni players, are carrying the hopes of our families, the vanua, and most importantly our young brothers and sisters who love playing rugby.”

“We are setting the platform for them that one day they can wear the white jumper.”

It is a proud moment for Teba, who played for Marist as well, as he plays alongside his nephews- Raturaciri and Yaya.

The village of Nukubalavu is beaming with excitement and delight as three of their sons are playing for the 7s team.

This week one can expect more thrills and screams when the 7s team takes fi eld. Toso Viti!