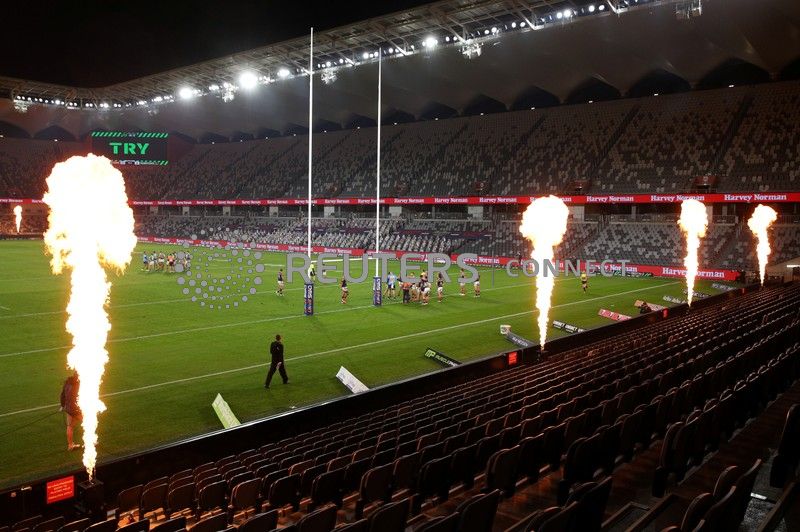 FILE PHOTO: A general view during a National Rugby League (NRL) match without fans between the South Sydney Rabbitohs and Sydney Roosters, as the 2020 season resumes following the coronavirus disease (COVID-19) outbreak, at Bankwest Stadium in Sydney, Australia, May 29, 2020. REUTERS/Loren Elliott

SYDNEY (Reuters) – Australia’s National Rugby League have cut crowd numbers for the Melbourne Storm’s next match amid concerns social distancing protocols were not being followed, while 12 members of a Melbourne basketball team have tested positive for COVID-19.

Television images from Storm’s game on Sunday against Newcastle on Queensland’s Sunshine Coast showed a packed embankment, with little spacing between fans.

Under Queensland state government rules, venues can only host crowds at 50% capacity. Sunday’s crowd of 5,437 was under that figure at the venue, which can accommodate up to 12,500, but fans were packed too closely together.

The Storm have relocated to Queensland following a spike in cases in Melbourne, the Victoria state capital. The state declared a state of disaster on Sunday and imposed a nightly curfew for Melbourne.

“We’ve been contacted by the NRL this morning, and the Storm themselves are saying they want to reduce the number of people to that stadium by 1,000,” Queensland Premier Annastacia Palaszczuk told reporters on Monday.

“We want people to adhere to social distancing. That is incredibly important.”

Queensland’s chief health officer Jeanette Young said her department was reviewing the situation at the game, adding that while the crowd had attempted to adhere to social distancing rules sitting on the grass made it more difficult.

Australian basketball has also been hit by concerns about the spread of COVID-19.

Melbourne United said 12 players had tested positive while players from South East Melbourne Phoenix have also undergone testing and been placed in isolation.

“Our primary concern is the health and welfare of our players, staff and their families,” National Basketball League Commissioner Jeremy Loeliger said.

“This is a challenging time for everyone concerned and we are working closely with the clubs and the Australian Basketball Players Association (ABPA) to provide support for all those affected.”

The NBL is not scheduled to start its new season until December.