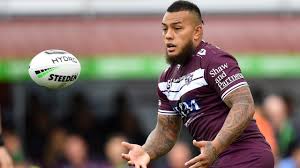 SYDNEY, 08 JULY 2020 (NRL) – Suspended Manly prop Addin Fonua-Blake faces further disciplinary action after NRL acting CEO Andrew Abdo found that he had breached the game’s anti-vilification code during separate outbursts on and off the field after Sunday’s 14-12 loss to Newcastle.

Fonua-Blake is serving a two-match ban for abusing referee Grant Atkins at full-time but the NRL is considering an additional sanction after it was revealed he made similar derogatory and offensive comments about the match officials in the Brookvale Oval dressing room.

“What happened on Sunday was divisive and against the fabric of what we stand for as a game,” Abdo said.

“There is no place for comments like that in our game. Sport is about bringing people and communities together and we pride ourselves on being an inclusive game for everyone.”

Fonua-Blake issued a written apology through the club on Sunday night at the urging of his wife and on Tuesday the Sea Eagles released a video in which he admitted “I let my emotions get the best of me”.

The Manly forward also confirmed he had continued his tirade in the dressing room but insisted the comments hadn’t been directly to Atkins or any other match official.

“I wasn’t aware that the refs were in the tunnel and they must have heard me say what I said in the sheds but it wasn’t directly at their face, it was me venting out loud in the sheds,” Fonua-Blake said.

He said that he later approached Atkins and apologised for his on-field comment after the Sea Eagles were denied a penalty by the Bunker in the final play of the game.

However, Fonua-Blake said he was now aware that he had vilified people with disabilities through the words he used in both incidents.

“Growing up I used the word differently not knowing what it actually meant. Now that I know what it means I am very apologetic. I didn’t mean to use it in a derogatory way to offend anyone and if I have offended anyone I am very sorry,” he said.

“I do not make fun of any disabled people and I will be working closely with the club over the next few weeks to offer my support to anyone who was offended by my words and hopefully I can make amends for what I said.

“I’d be very upset if I heard one of my kids do that. I don’t teach my kids to tease people, let alone people with disabilities. Bullying in any form is not right.”

Atkins sent Fonua-Blake off for his on-field comments and charged with grade three contrary conduct by the NRL match review committee.

“I was appalled that continued on,” V’landys told Channel Nine.

“Everybody can make a mistake in the heat of the moment on the field and say something stupid but then you have got time to cool down, so walking off the field and continuing to abuse the referee and to use those terms and names cannot be tolerated under any circumstances.

“Kids with a handicap or who are disadvantaged will be picked on at school because role models are speaking in those terms. Also, no referee should have to put up with that sort of abuse and insult.”

Abdo said he wanted to speak directly with Fonua-Blake and the Sea Eagles about the incidents before determining any penalty.

“This is more than a simple sanction,” Abdo said. “It’s important there is an education and rehabilitation component to issues like this to ensure players learn from these mistakes and realise the impact of their actions on the community.”

Abdo reaffirmed the game had a zero-tolerance approach for abuse of match officials.

“Our match officials have the toughest and most scrutinised job in the game. Decisions are always going to have an element of controversy but there is no excuse for abuse of any kind aimed at our officials. It will not be tolerated,” he said.

“I want to thank and congratulate all our officials who have adapted to significant rule changes this season.”​