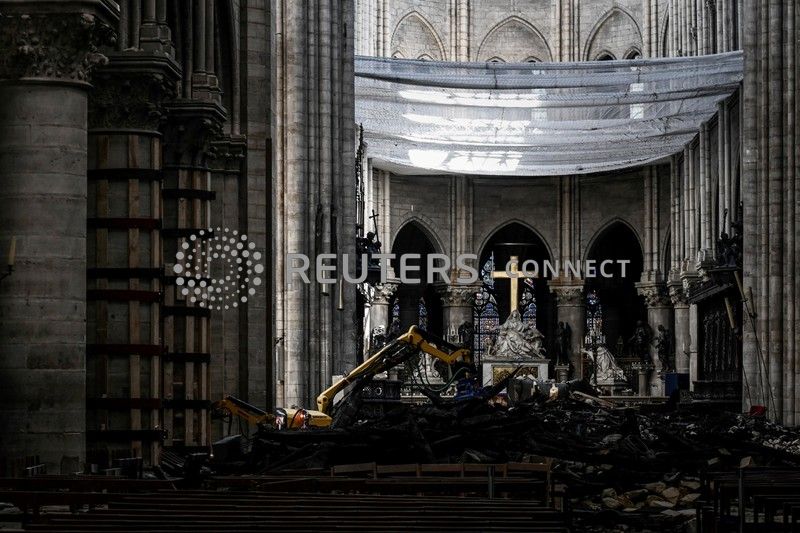 FILE PHOTO: A picture shows rubbles and the cross at the altar, inside the the Notre-Dame Cathedral after it sustained major fire damage from the previous month, during the visit of Canadian Prime Minister Justin Trudeau in Notre-Dame Cathedral in Paris, France May 15, 2019. Philippe Lopez/Pool via REUTERS

PARIS (Reuters) – An electrical fault or a burning cigarette may have been responsible for the fire that gutted Notre-Dame Cathedral, French authorities investigating the cause of April’s blaze said on Wednesday.

Paris prosecutors said that, while they were investigating the possibility of negligence, they currently had no reason to believe the fire was started deliberately.

It ripped through the mediaeval cathedral on April 15, destroying the roof, toppling the spire and almost bringing down the main bell towers and outer walls before firefighters brought it under control.

“If certain failings, which may explain the scale of the fire, have been brought to light, the investigations carried out to this date have not yet been able to determine the causes of the fire,” said a statement from Paris prosecutor Remy Heitz.

“For now, there are no indications of a criminal origin,” he added. However, nothing had been ruled out, with an electrical fault and a cigarette that was not properly extinguished two of several possible causes being investigated, he said.

President Emmanuel Macron has set a target of five years for restoring Notre-Dame, which dates back to the 12th century and is one of Europe’s most iconic landmarks.