‘Nothing is off the table’: Waratahs open to Michael Cheika comeback after sacking Rob Penney 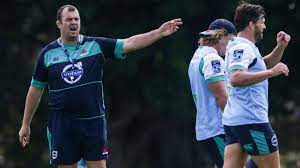 The Waratahs are open to the extraordinary possibility of title-winning coach Michael Cheika returning to the organisation after the sudden axing of Rob Penney this week. Picture: SMH

SYDNEY, 03 APRIL 2021 (SMH) – The Waratahs are open to the extraordinary possibility of title-winning coach Michael Cheika returning to the organisation after the sudden axing of Rob Penney this week.

The development came as All Blacks legend Andrew Mehrtens went into bat for Penney by taking issue with Cheika’s claim this week that the Kiwi coach was not a scapegoat for bigger failings at the outfit.

Penney was given his marching orders on Sunday following five straight losses. While many disagreed with the decision, Cheika gave a contrary view on a special Stan Sport program on Wednesday evening.

“I don’t think it’s a scapegoat play at all,” Cheika said on Stan Sport. “I think that in the professional game the coach is in charge. You know your circumstances, you try and modify them, you try and change them. Maybe he hasn’t met the criteria of what they want.”

Mehrtens responded to what he felt were unfair comments aimed at Penney, with whom he played at Canterbury at the start of his professional career.

“How can Cheik say with a straight face it’s not a scapegoat play? Of course it is.” Mehrtens said. “When we look at the context of what’s gone on over the last few years and despite all the acknowledgements of various failings, Penney is the only one to go?

“He’s not the guy who is going to go out and make excuses or try and blame everyone else, when he actually had the most reason of any coach in history to be lamenting the s… sandwich that he got given.

Talk in Sydney rugby circles this week has centred on the potential for Cheika, who guided NSW to a maiden Super Rugby title in 2014, to return to the Tahs as a head coach or as a director of rugby.

Cheika did not respond to the Sydney Morning Herald’s request for comment but sources close to the 54-year-old believe he is weighing up the merits of a comeback as a director of rugby, with his former Waratahs and Wallabies assistant Nathan Grey coming in as coach.

NSW Rugby sources with knowledge of discussions maintain the franchise has not spoken with Cheika about a comeback but is open to the idea, with one official saying “nothing is off the table”.

Cheika has stated his desire to coach the Wallabies once again after a stint from 2014 to 2019. It is likely he would want a long-term deal and with offers in Europe and Japan, wouldn’t come cheap.

NSW Rugby is some time away from locking down what the coaching structure will look like next year, however Cheika, as well as others, has been asked what he believes is the best structure moving forward.

If Cheika did not want to be a Waratahs ‘overlord’, there would be nothing stopping him from doing some consultancy work, given he is already busy working with Lebanon’s rugby league team and potentially again with Argentina’s national rugby team.

A problem could arise, however, if Cheika had to work in tandem with Australia’s director of rugby, Scott Johnson. Cheika has said he felt undermined when Johnston was brought in at the beginning of 2019 to rein in his power ahead of the World Cup.

Asked if he thought there was value in bringing Cheika back, Mehrtens said: “I think Cheik is a good coach and he’s obviously an experienced coach. He’s passionate about the Waratahs and these are all things Rob Penney was too. I think perhaps Cheik is a bit more politically resilient. He is extremely forthright and that might be too much for some in what is clearly a sensitive environment currently.

“Since he last left the Waratahs he has had international experience. You’d have to think that’s added to his ability as a coach as well. I don’t know what the structure is … but I think sacking Penney was a hasty decision for starters but it’s done now and it’s important to now look forward.”

Rugby Australia will be consulted closely in the process of finding Penney’s replacement and senior figures are keen for an Australian to get the nod, even though the NSW Rugby board will ultimately have the final say.

Assistant-turned-interim coach, Chris Whitaker, said hadn’t given the head coaching role any thought and batted away a question about Cheika potentially being involved again.

“I’d rather just talk about the game … I’ve got other things to worry about,” said Whitaker ahead of Friday’s Brumbies clash. ” It’s been 7am til 9pm the last few days.”

“I was disappointed around that for Rob,” Thorn said. “It’s a tough old gig, isn’t it. Joe Schmidt was my coach at Leinster. It’s probably a well used line but [he would say] a coach is either sacked or going to be sacked. It can be a ruthless game.”