Not so fast: CDC isn’t ready to blame illicit ‘street vapes’ for illnesses 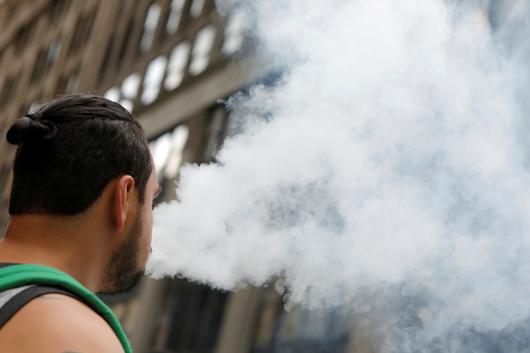 A man uses a vape as he walks on Broadway in New York City, U.S., September 9, 2019. REUTERS/Andrew Kelly

CHICAGO (Reuters) – U.S. health investigators are casting a wide net to understand what is sickening hundreds of vapers across the country and still have not ruled out any product on the market, even as vaping industry officials highlight the potential role of illegal cannabis products.

Dr Dana Meaney-Delman is leading the U.S. Centers for Disease Control and Prevention’s investigation into the culprit behind at least five confirmed deaths and 450 reported cases of lung illness linked with use of the devices.

The agency is recommending that people refrain from the use of any electronic cigarette or vaping device until there is more conclusive evidence of a cause, she said in an interview.

She has reviewed data so far from 64 patients, including cases published on Friday in the New England Journal of Medicine as well as other reports. Eighty percent of those patients reported the use of tetrahydrocannabinol (THC), the psychoactive component of cannabis, she said.

On Friday, the U.S. Food and Drug Administration warned consumers against using vaping devices bought “on the street” or adding THC and other substances to products purchased in stores. E-cigarette manufacturers have distanced themselves from illicit “street vapes” and stressed that their products don’t contain the liquids under scrutiny.

“We agree with the FDA. If you don’t want to die or end up in a hospital, stop vaping illegal THC oils immediately,” said Gregory Conley, president of the American Vaping Association.

Meaney-Delman said investigators are not yet ready to distinguish between products. The data she has reviewed show that 60 percent of patients used both THC and nicotine, while 20 percent reported only using nicotine in their devices.

“We’re absolutely concerned about THC, but there’s a large number in our data that are reporting (use of) both nicotine and THC,” Meaney-Delman said. “There is no one product, device or substance that we can point to that is common among all these different patients.”

Patient 9 allowed to travel out of Vanua Levu