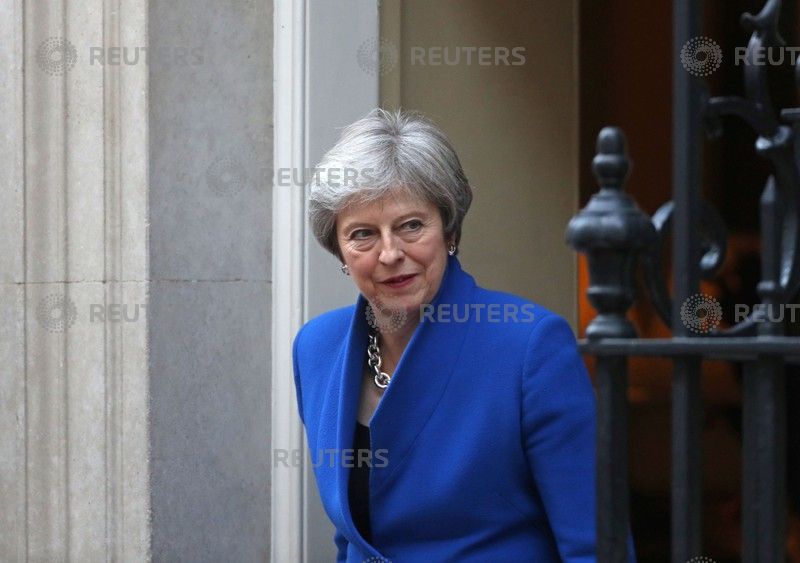 LONDON (Reuters) – The Northern Irish party which props up Prime Minister Theresa May’s government on Friday cast her Brexit negotiation as a betrayal and cautioned it could not support a deal that divided the United Kingdom.

The warning underscores the travails that May faces in getting any Brexit divorce deal, which London and Brussels say is 95 percent done, approved by both her fractious party and by the Northern Irish lawmakers who keep her in power.

Less than five months before Britain is due to leave the EU on March 29, negotiators are still haggling over a backup plan for the land border between British-ruled Northern Ireland and EU member Ireland should they fail to clinch a deal.

The Democratic Unionist Party (DUP) interpreted a promise made by May in a letter that she would never let a division of the UK “to come into force” as an admission that such a clause would be included in a final deal, the Times reported.

“The prime minister’s letter raises alarm bells for those who value the integrity of our precious union and for those who want a proper Brexit for the whole of the United Kingdom,” DUP leader Arlene Foster said.

“From her letter, it appears the prime minister is wedded to the idea of a border down the Irish Sea with Northern Ireland in the EU single market regulatory regime,” Foster said.

May, who marks the centenary of the end of World War One at ceremonies in Belgium and France on Friday, has repeatedly said she will not accept any deal that breaks up the United Kingdom.

But the DUP has torpedoed Brexit talks before.

Nearly a year ago, its refusal to sign off on a deal on the border caused the temporary collapse of Brexit talks at a crucial stage. Negotiators later found a way to keep all sides on board.

The Brexit deal – or the lack of one – will shape Britain’s prosperity for generations to come and have long-term consequences for the European Union’s global clout.

Both sides need an agreement to keep trade flowing between the world’s biggest trading bloc and the fifth largest global economy. The other 27 members of the EU combined have about five times the economic might of Britain.

“A successful outcome is not guaranteed but I think it is possible in the next couple of weeks,” Irish Prime Minister Leo Varadkar said.

But May has struggled to untangle nearly 46 years of membership without damaging trade or upsetting the lawmakers who will ultimately decide the fate of any deal she can secure.

If a deal is voted down by parliament, the United Kingdom would be thrust into an uncertain future: leaving without a deal, the collapse of May’s government, an election, or, some opponents of Brexit hope, a new referendum.

Ever since May triggered formal divorce talks in March 2017, negotiators have struggled to find a solution to the 310-mile land border on the island of Ireland.

Both sides want to avoid customs posts that some fear could reignite the violence in Northern Ireland that was ended by a U.S.-brokered peace accord in 1998.

Under discussion is a fallback option for the border. London argues that the whole of the United Kingdom should stay inside a temporary customs arrangement with the EU, though it is unclear for how long and what would happen after exiting that.

The EU has insisted on a insurance policy – or a backstop to the backstop – a demand London signs a treaty clause that could leave Northern Ireland inside the EU customs space.

That is unacceptable for May’s “Unionist” supporters whose entire political ideology is based on defence of Northern Ireland’s place within the United Kingdom.

DUP leader Foster said in a letter to May that any backstop could not leave Northern Ireland aligned to specific sectoral EU market regulations. And any backstop would have to have a clear expiry date, she said.

Without DUP support for a deal, May will have much less chance of getting her deal through parliament. She needs 320 votes to get a deal passed.

Ever since her botched gamble on a snap election in 2017 lost her party its majority in parliament, May has relied on the DUP to govern. May has 315 lawmakers but relies on the 10 DUP lawmakers to pass legislation.

U.S. bank JP Morgan said it expected parliament to reject a deal on the first attempt but to later give its assent on a second or third try.