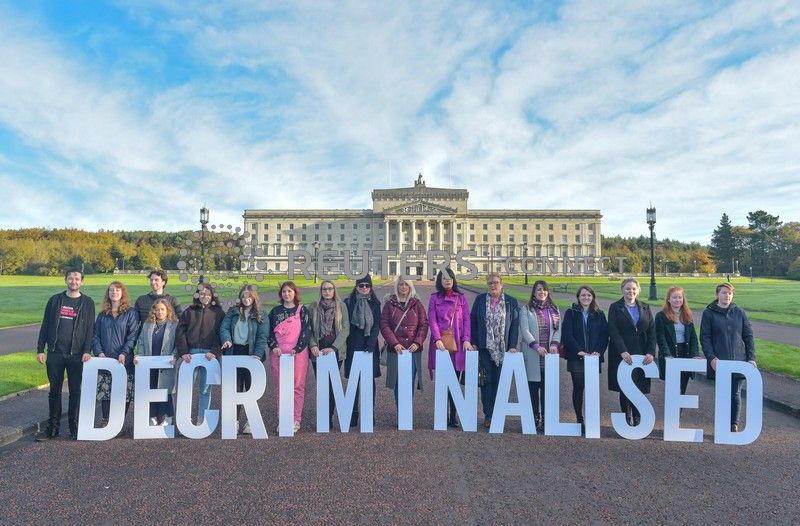 BELFAST (Reuters) – Campaigners who fought for decades to end Northern Ireland’s same-sex marriage ban and restrictions on abortion gathered in Belfast on Monday to prepare for a momentous change to the laws on both at the stroke of midnight.

Northern Ireland is the only part of the United Kingdom that does not allow same-sex marriage. Also, unlike England, Scotland and Wales, laws in Northern Ireland forbid abortion except where a mother’s life is at risk, bans that have been upheld by the region’s conservative politicians.

In July, British lawmakers in London voted overwhelmingly to compel the government to overhaul the laws if Belfast’s devolved executive was not restored by midnight on Oct. 21.

“We are not going to stick with the guilt and the shame any longer. Tomorrow the law changes in this place, and for the first time in Northern Ireland, women will be free,” abortion rights campaigner Dawn Purvis told a public meeting in Belfast

“Free to choose if, when and how many children they will have in the care of health-care professionals. This is a very emotional day for many here.”

If a new devolved government is not formed by midnight, abortion will be decriminalised, beginning a consultation on what the framework for services should look like, which is due to be finalised and approved by March 2020.

Abortion rights were long opposed in Northern Ireland by religious conservatives in both the Protestant community that supports continued British rule and the Catholic community that favours union with the traditionally Catholic Irish Republic.

Previous attempts to follow the Irish Republic in legalising abortion have been blocked by the socially conservative Democratic Unionist Party (DUP), using a special veto intended to prevent discrimination towards one community over another.

The mothballed Assembly was recalled briefly by unionists on Monday in a last-ditch attempt to block changes that failed on procedural grounds.

“It is a very sad day and I know some people will seek to celebrate and I would say to those people, think of us who are sad today and who believe this is an affront to human dignity,” DUP leader Arlene Foster said after leaving the chamber.

The changes will bring the province’s laws on same-sex marriage into line with the rest of the United Kingdom, and same-sex couples and marriage equality activists gathered in Belfast on Monday to celebrate.

“Today means the world to us. Members of our community are that little bit more equal in our society. We have not asked for more rights, but the same rights as everyone else,” said activist Shane Sweeney.

It will take the British parliament until mid-January to bring in the new legislation, setting up Feb. 14, 2020 – Valentine’s Day – as the first opportunity for same-sex couples to marry once they give the required 28 days’ notice.