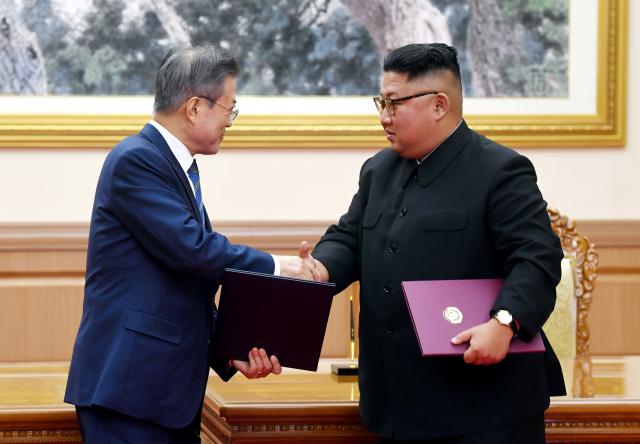 SEOUL (Reuters) – North and South Korea will hold high-level talks on Monday at the border village of Panmunjom to discuss follow-up steps to their recent summit, Seoul’s Unification Ministry said on Friday.

The latest talks will take place on the south side of the Panmunjom within the Demilitarised Zone and be led by the South’s Unification Minister Cho Myoung-gyon, the ministry said.

The North has yet to confirm its delegation but previous sessions were steered by Ri Son Gwon, chairman of the Committee for the Peaceful Reunification of the Country in charge of cross-border affairs.

“Through the high-level meeting, we will discuss ways to implement the Pyongyang agreement overall and finalise the schedules for follow-on talks on each area,” the ministry said in a statement.

The announcement comes amid U.S. concerns that inter-Korean relations may be warming too fast relative to negotiations to dismantle North Korea’s nuclear and missile programs.

U.S. Secretary of State Mike Pompeo has expressed “discontent” with an inter-Korean military pact reached during last month’s summit in a rare sign of disagreement between the allies. [KCN1MK21Q]

The two Koreas agreed in that accord to halt military drills, set up a no-fly zone near the border and gradually remove landmines and guard posts within the Demilitarised Zone, among other steps.