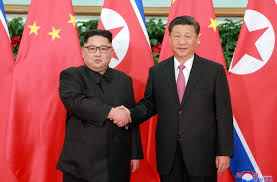 Kim said during his China visit this week that there is no change in North Korea’s stance to faithfully carry out the agreement reached with U.S. President Donald Trump during their Singapore summit, and pursue a peaceful resolution through discussion, KCNA said.