North Korea warns of ‘undesired consequences’ if no change in U.S. nuclear stance 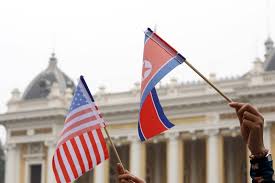 FILE PHOTO - Residents hold US and North Korean flags while they wait for motorcade of North Korea's leader Kim Jong Un en route to the Metropole Hotel for the second US- North Korea summit in Hanoi, Vietnam February 28, 2019. REUTERS/Kham

SEOUL (Reuters) – North Korea’s vice foreign minister said on Tuesday the United States will face “undesired consequences” if it fails to present a new position in denuclearization talks by the end of the year, state media reported.

North Korean leader Kim Jong Un has set a year-end deadline for the United States to show more flexibility after his second summit with U.S. President Donald Trump failed to produce a deal to end Pyongyang’s nuclear program in return for sanctions relief.

But Trump and U.S. Secretary of State Mike Pompeo have brushed aside the deadline, calling for Kim to take action on his pledge to denuclearize after years of pursuing nuclear and rocket programs in defiance of U.N. Security Council resolutions.]

North Korean Vice Foreign Minister Choe Son Hui singled out Pompeo’s interview last week with CBS in which he said the United States may have to “change paths” if the negotiations break down.

“Changing paths is not a privilege that only the United States has, but it could be our own choice if we make up our mind,” Choe said, according to the official KCNA news agency.

“If the United States fails to reestablish its position within the timeline we gave, it will see truly undesired consequences.”

She also said North Korea’s determination to denuclearize remained unchanged. It would happen “when the time comes,” but only if the United States changed its current calculations.

“We know the path we will take, but we’re just hesitating to choose as we have set the deadline for the United States,” Choe said.

The North had been seeking a deal to ease sanctions in exchange for dismantling some of its nuclear facilities, but Trump called for a “big deal” in which sanctions would be lifted if Pyongyang handed over all its nuclear weapons to the United States.

Choe’s remarks continue North Korea’s attack on Trump’s point person on the nuclear negotiations, after another foreign ministry official rejected Pompeo as a counterpart, demanding a switch to someone “more careful and mature.”

Pompeo reiterated on Monday that he was still in charge of the U.S. negotiating team when asked about North Korea’s calls for him to be dropped from the talks.

Trump has said he is open to a third summit with Kim, but has stressed that sanctions will remain in place.

In answer to a question in the Monday interview, Pompeo said he did not know whether a third summit could take place as soon as the summer.

“We want to make sure that we create the conditions where if we deliver that, if the two leaders get together, that we can make substantial progress,” he said, while adding that Washington was working diplomatically with Russia, China and others to ensure sanctions are enforced.

“And we’re confident that as we continue to apply the economic pressure to North Korea that we’ll get another opportunity to unlock and get North Korea to denuclearize,” he said.