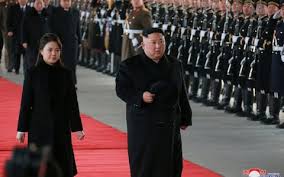 China’s official Xinhua news agency also confirmed the visit and said Kim is visiting China from Monday to Thursday. The report did not state the purpose of the visit.

The visit, first reported by South Korean media, comes amid reports of advanced negotiations for a second summit between Washington and Pyongyang.

Kim traveled to China, his most important ally, three times to meet with Xi last year before and after summits with U.S. President Donald Trump and South Korean President Moon Jae-in.

Neither KCNA nor Xinhua provided further information on Kim’s itinerary, though South Korea’s Hankyoreh newspaper said on Monday that he will meet with China’s Xi for a fourth summit.

Kim said last week in a New Year address he is ready to meet Trump again anytime to achieve their common goal of denuclearizing the Korean Peninsula, but warned he may have to take an alternative path if U.S. sanctions and pressure against the country continued.

China is North Korea’s most important economic and diplomatic backer, despite anger over its neighbor’s nuclear and missile programs. Ties have warmed in the last year as Pyongyang’s relations with both Seoul and Washington have also improved.