No whipping of horses 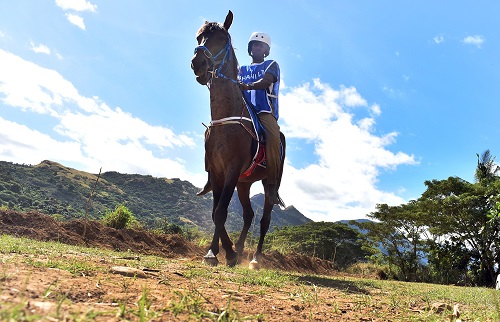 Sumit Kumar with his horse My Lambu try out the tracks at Aviva farms in Sabeto, Nadi. Picture: BALJEET SINGH

NO whipping will be allowed during all the ten events of the Sabeto Horse Races at the Aviva Farms tracks in Nadi today.

The organisers of the Sabeto Horse Races have partnered with Animals Fiji for the last two events and are hoping that this rule will help encourage and inspire more horse owners to be kinder to their horses.

Sabeto Horse Races event creator Kim Beddoes said the feedback they had received from Animals Fiji for both years is that they were pleasantly surprised as how well the horses were looked after.

“We have some basic rules and the main one is that no whipping is allowed,” Beddoes said.

Since horseracing is not an official sport in the country, there are no rules on the use of whips.

In Australia, the rules of racing require a specific “padded” whip to be used.

The rules set a limit of five whip strikes prior to the final stage of a race, but there is no limit on the number of times a horse can be struck with the whip during the last 100 metres of a race.

Beddoes said it had been a challenge to hold the event since horse racing was not an official sport in the country. “In 2018 we collected a database of all the horses that took part in the races,” she said. “We gave the first opportunity to the winners of all the races from last year’s event to defend their titles.”