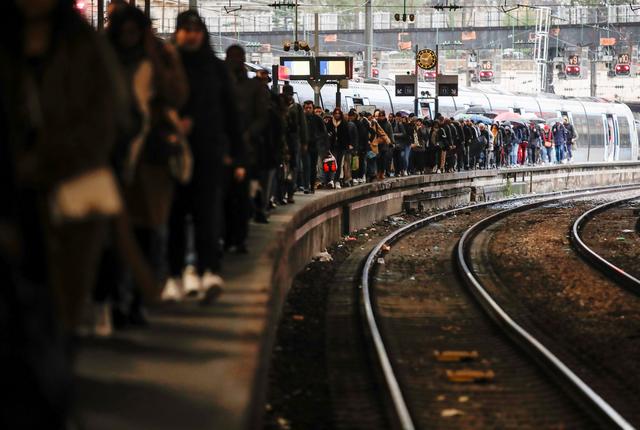 The week ahead will test whether Macron can deliver the social and economic change he says is necessary for France to compete with powers like China and the United States.

A meeting between Macron’s pension tsar, Jean-Paul Delevoye, and union leaders on Monday showed no sign of breaking the impasse, with Prime Minister Edouard Philippe due to present the “architecture” of the reforms on Wednesday.

“We will continue to protest and strike,” Catherine Perret, a senior official from the hardline CGT union, told reporters after the meeting. “Tomorrow will be a show of force.”

At the Gare du Nord there were chaotic scenes as passengers pushed and shoved to get onto packed suburban trains, videos circulating on social media showed. On the roads there were massive traffic jams as many commuters resorted to their cars.

Unions are calling on teachers, doctors, dockers and other public workers to down tools on Tuesday.

Philippe told the weekly Journal du Dimanche that he was determined to see through the overhaul of what is one of the most generous pension systems among developed industrialized nations.

The government will be monitoring Tuesday’s marches closely to see if they draw more than the 800,000 people who marched through French cities on Thursday. Last week’s demonstrations were marred by violent clashes between police and hooded protesters.

Macron wants to replace a convoluted system comprised of more than 40 separate pension plans, each with varying benefits, with a single, points-based system under which for each euro contributed, every pensioner has equal rights.

Delevoye on Monday said online surveys showed broad public support for protecting how much people receive in retirement but little common ground over how to deal with the burden of increasing life expectancies put on national coffers.

“There is broad agreement about the need to protect the level of our pensions,” Delevoye told reporters, “but disagreement about what choices to make in order to respond to the increase in life expectancy.”

“The solution of lowering pensions even by a little bit is clearly rejected,” he added.