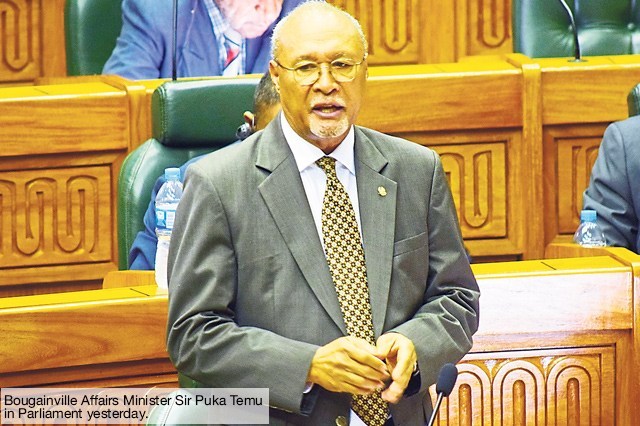 PORT MORESBY, 30 JUNE 2019 (THE NATIONAL) – Bougainville Affairs Minister Sir Puka Temu says the Referendum must not be deferred and it should be fully funded.

Sir Puka in his brief to Parliament said the referendum needed to be delivered on schedule.

Having recently visited Bougainville, Sir Puka spoke of meetings and discussions he held with various groups, including the Bougainville Referendum Commission and the Autonomous Regional of Bougainville government.

“The referendum is a non-binding referendum and it has to be negotiated before it comes to Parliament to be ratified.

“It’s going to be a negotiated outcome that will come before the floor of Parliament for us leaders to ratify.

“The referendum commitment must be done under a peaceful process; that is the bottom line of the peace agreement.

“In everything that we do, peace must be maintained.

“Our job is to work together with everybody on Bougainville to make sure that the referendum process is concluded,” Sir Puka said

He said two big events are being planned to take place soon, the national reconciliation programme and the ex-combatant’s peace programme.

Sir Puka said a date was yet to be confirmed and he was now in the process of mobilising resources with the help of the Australian and New Zealand governments.

“These are very important because that will set the pace and guarantee the security and the referendum process.

“The Bougainville Referendum Commission is in a very tight time frame in terms of resources.

“It was established in June, 2017 and time has caught up with the team that they have gathered to manage this process.

“We are working closely with BRC to ensure that they deliver everything,” he said.

Sir Puka will present a detailed report to Parliament at a later date.

Meanwhile, the Bougainville Peace Agreement (BPA) is an important matter for the country and must be attended to in a transparent and genuine manner, Southern Highlands Governor William Powi says.

Powi, a former chairman of the Parliamentary Bipartition Committee on the Bougainville Peace Agreement, made the remarks in Parliament when debating a report on the BPA presented by Bougainville Affairs Minister Sir Puka Temu.

“I was the former chairman of the Parliamentary Bipartition Committee on Bougainville Peace Agreement and there are a lot of outstanding issues,” Powi said.

“There’s a lot of issues of negligence on the side of the national government and all these were covered in a detailed report that my committee presented to this Parliament earlier on.

“The report is comprehensive and I want the new Government, under the leadership of Prime Minister James Marape, to revisit this report and implement the recommendations contained therein.”

Powi said the biggest issue facing the country was the issue of BPA and it had to be addressed through transparent and genuine dialogue.

“I recommend that the new Government immediately establish genuine and transparent consultation between ABG to look into how the many outstanding issues under the peace agreement can be addressed appropriately,” he said.

“The issues must be addressed in an open and transparent process before a vote can be taken by the people of Bougainville.

“But as it is, there’s a lot of issues on negligence in implementing the peace agreement and we must not shy away from it.

“We must stand up to address it together, and I call on the new government to immediately establish honest, transparent and genuine dialogue with the ABG and the people of Bougainville.”

Powi reiterated that what is due to the people of Bougainville had to be given to them as they were people of an autonomous government declared under the constitution and not a provincial government.