No ‘boots on the ground’ in Iran dispute, Trump says; cites ‘unlimited time’ for new deal 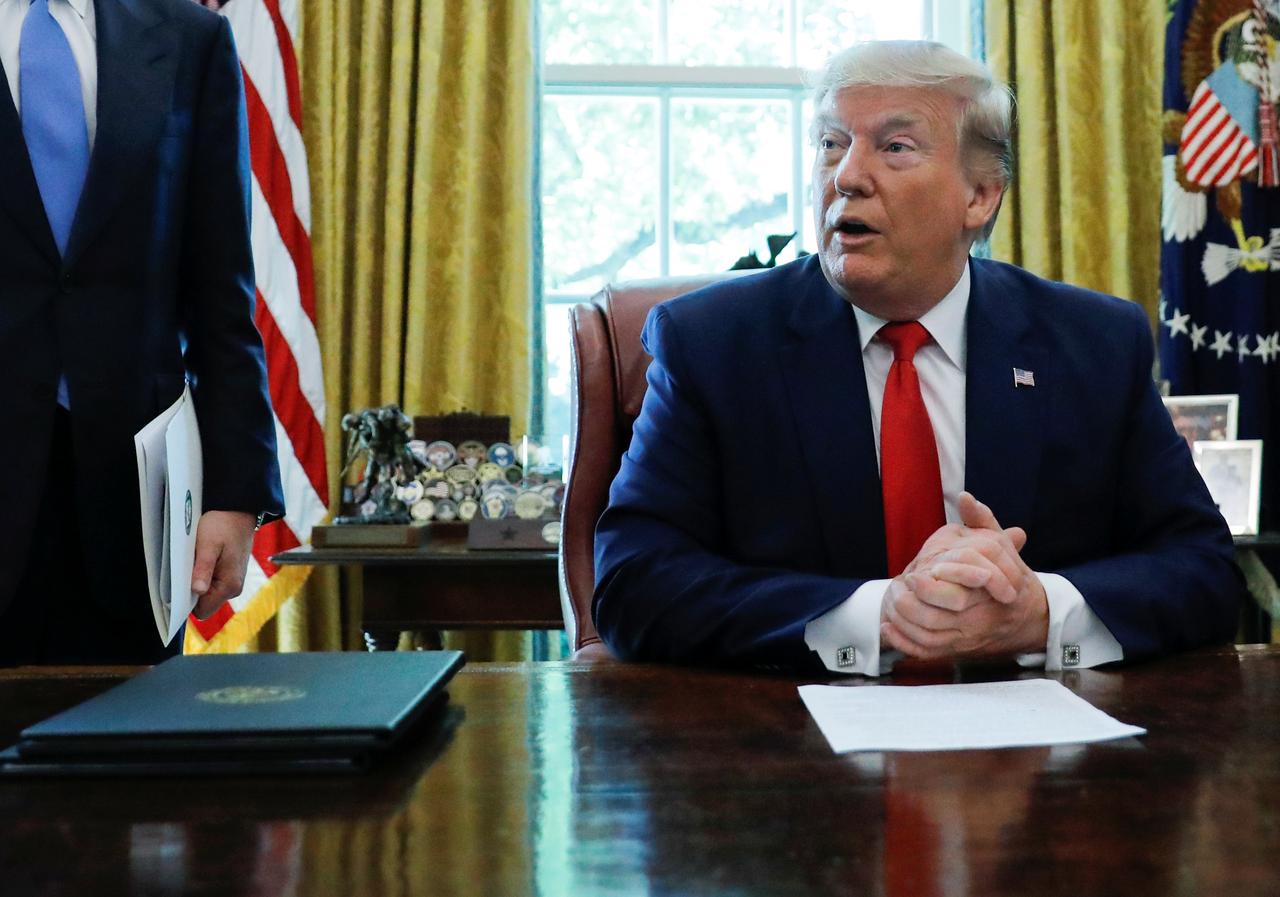 U.S. President Donald Trump talks about the United States imposing fresh sanctions on Iran before signing an executive order in the Oval Office of the White House in Washington, U.S., June 24, 2019. REUTERS/Carlos Barria

WASHINGTON/GENEVA (Reuters) – U.S. President Donald Trump said on Wednesday that he was “not talking boots on the ground” should he take military action against Iran and that he had “unlimited time” to try to forge an agreement with Tehran.

Iran suggested it was just one day from breaching a threshold in the 2015 international nuclear deal that limited its stockpile of uranium, a move that would pressure European countries aiming to be neutral to pick sides.

The fate of the nuclear deal, under which Iran agreed to curbs on its nuclear program in return for access to international trade, has been at the heart of the dispute which took on a military dimension in recent weeks.

Last week Iran shot down a U.S. drone it said was in its air space, which Washington denied. Trump ordered retaliatory air strikes but called them off at the last minute, later saying too many people would have died.

Asked on Fox Business Network if a war was brewing, Trump replied: “I hope we don’t but we’re in a very strong position if something should happen.”

“I’m not talking boots on the ground,” Trump said. “I’m just saying if something would happen, it wouldn’t last very long.”

In an appearance later on Wednesday at a gathering of religious conservatives, the U.S. president talked about whether there could be a new agreement with Iran, suggesting that he could live without a new deal.

“If it doesn’t happen, that’s fine with me,” Trump told a gathering of religious conservatives. “I have unlimited time, as far as I’m concerned.”

Trump has said the accord with Iran, struck under his predecessor President Barack Obama, did not go far enough to restrict Iran’s nuclear and missile programs and other activities in the Middle East.

Washington accuses Iran of being behind bomb attacks on ships in the Gulf, which it denies. Trump has tightened sanctions in recent weeks.

Iran warned the U.N. Security Council on Wednesday that it would no longer be burdened with preserving the pact as European states pushed Tehran to stick with the agreement because there was no peaceful alternative.

“Iran alone cannot, shall not and will not take all of the burdens any more to preserve the JCPOA,” Iran’s U.N. Ambassador Majid Takht Ravanchi told the 15-member Security Council, using the acronym for the deal’s formal name, the Joint Comprehensive Plan of Action.

U.S. allies warn that an increase in tensions could accidentally lead to war.

Iran and world powers including the United States who signed the nuclear pact needed to find a way back into talks to defuse tensions, French President Emmanuel Macron said on Wednesday.

“I believe the escalation, sanctions on top of sanctions, provocations, the military build-up, is extremely dangerous because it could ignite the region, it could lead to over-reactions,” Macron told Japanese broadcaster NHK on the eve of a G20 summit in Osaka.

“When confidence is lost, you need little gestures to reduce tensions.”

Although the United States and Iran both say they do not want war, last week’s aborted U.S. strikes have been followed by menacing rhetoric on both sides. On Tuesday Trump threatened the “obliteration” of parts of Iran if it struck U.S. interests. President Hassan Rouhani, who normally presents Tehran’s mild-mannered face, called White House policy “mentally retarded.”

The standoff creates a challenge for Washington which, after quitting the nuclear deal against the advice of European allies, is now seeking their support to force Iran to comply with it.

Over the past few weeks Iran has set a number of deadlines for European countries to protect its economy from the impact of U.S. sanctions or see Tehran reduce compliance with the deal.

A spokesman for Iran’s Atomic Energy Organisation said that one of those deadlines would expire on Thursday, with Iran potentially exceeding a limit imposed under the deal to keep its stockpile of enriched uranium below 300 kg.

The IRIB news agency quoted spokesman Behrouz Kamalvindi as saying that after the deadline Iran would speed up its rate of producing the material.

Another threshold bars Iran from enriching uranium to a purity beyond 3.67 percent fissile material. It has set a deadline of July 7 after which it could also breach that.

European countries have tried to salvage the nuclear deal by promising to provide Tehran with economic benefits to offset the harm from U.S. sanctions. So far they have failed, with Iran largely shut from oil markets and all major European companies cancelling plans to invest.

The U.N. political affairs chief, Rosemary DiCarlo, told the Security Council on Wednesday that implementation of the nuclear deal could be hindered both by the U.S. moves to bar countries from buying Iranian oil and by Iran’s announcement that it would reduce compliance.

Iran says it would be Washington’s fault if it exceeds the 300 kg stockpile threshold. The 2015 deal allows Iran to sell excess uranium abroad to keep its stockpile below the limit, but such sales have been blocked by U.S. sanctions.