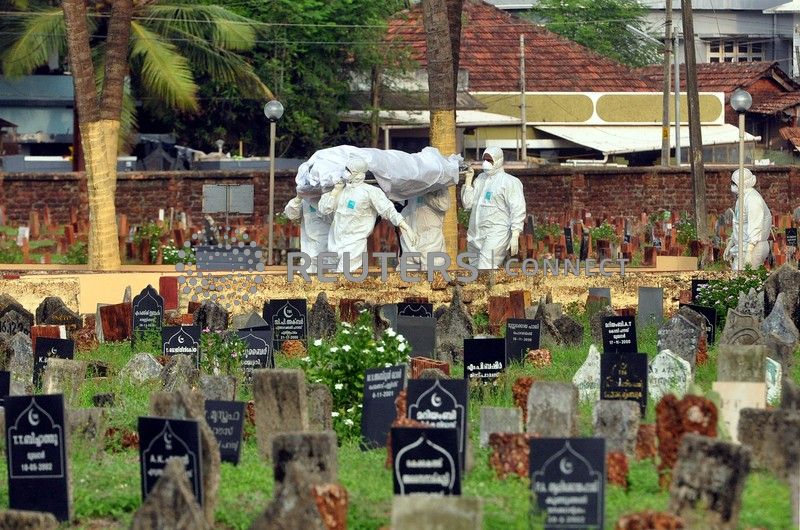 FILE PHOTO: Doctors and relatives wearing protective gear carry the body of a victim, who lost his battle against the brain-damaging Nipah virus, during his funeral at a burial ground in Kozhikode, in the southern Indian state of Kerala, India, May 24, 2018. REUTERS/Stringer/File Photo

NEW DELHI (Reuters) – The deadly brain-damaging Nipah virus has resurfaced in the southern Indian state of Kerala a year after it killed 17 people, state officials said on Tuesday.

A 23-year-old student tested positive for the virus, which is transmitted to humans through direct contact with infected bats, pigs or other people.

Kerala Health Minister K.K. Shailaja told reporters that four other people had Nipah-like symptoms. Another 80 people were being monitored, including some who were in close contact with the student.

Shailaja said isolation wards had been set up across the state, where 19 cases were reported last year.

“There is no need for panic,” he told reporters.

There is no vaccine for the virus which can cause encephalitis, or inflammation of the brain, according to the World Health Organization (WHO). It recommends treatment through supportive care.

Nipah is on the WHO’s research and development “priority pathogen” list alongside Ebola, Zika, MERS, Lassa and Crimean-Congo haemorrhagic fever.

The virus was first identified in 1999 during an outbreak of illness affecting pig farmers and others in close contact with pigs in Malaysia and Singapore.

More than 100 people died in that outbreak that year, and about a million pigs were killed to try to halt its spread.