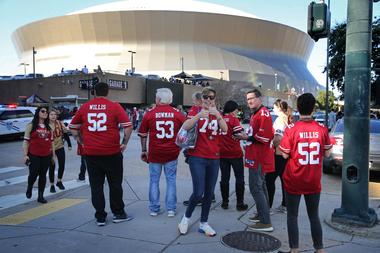 Garoppolo completed 26 of 35 passes for 349 yards and drove the 49ers 63 yards in the final minute after Drew Brees had given the Saints a one-point lead with his fifth touchdown pass of the day.

On fourth-and-2 from the 49ers’ 33-yard line, Garoppolo threw a 39-yard completion to George Kittle that, combined with a facemask penalty on the tackle, got Gould in range as the 49ers (11-2) moved ahead of the Saints (10-3) in the NFC seedings.

Seattle (10-2), which visits the Los Angeles Rams on Sunday night, holds the tiebreaker over the 49ers. The two teams meet again in the regular-season finale.

Emmanuel Sanders caught seven of Garoppolo’s completions for 157 yards and a touchdown and also threw a touchdown pass of his own.

The Saints led for most of the first half, but the 49ers scored in the last minute of the second quarter to take a 28-27 halftime lead.

Brees then drove the Saints to a go-ahead 18-yard touchdown pass to Tre’Quan Smith with 53 seconds left. A two-point conversion failed, leaving New Orleans with a 46-45 lead.

Brees threw two touchdown passes to Jared Cook and one to Josh Hill and leaped 1 yard to account for four first-half touchdowns. Garoppolo threw a 6-yard touchdown pass to Bourne and a 75-yarder to Sanders, and Raheem Mostert caught a 35-yard touchdown pass from Sanders and then added a 10-yard scoring run to give San Francisco a 28-27 halftime lead.