Night out turns into tragedy 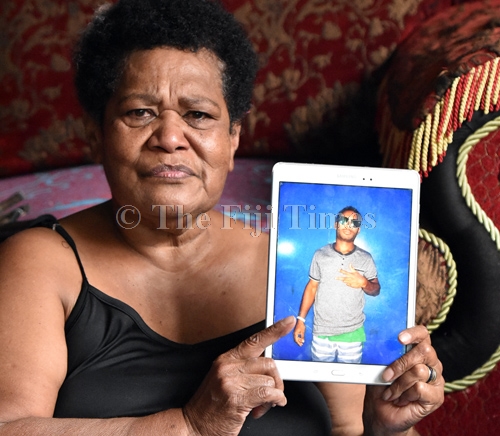 Aunty Vika Vakaloloma shows the picture of her nephew Josefa Tuiloma who she brought up from childhood at her place in Tamavua. Tuiloma died after an accident in Samabula last week. Picture: RAMA

A YOUNG man’s night out with his cousin turned into tragedy when he was killed in an accident along Ratu Mara Rd in Samabula, Suva on Saturday morning. Josefa Tuiloma left home on Friday night, but failed to return the next morning.

His aunt, Vika Vakaloloma, had spent her Friday night in church and when she returned home, she was told that Josefa was still not home.

An emotional Mrs Vakaloloma said she was about to begin her normal household chores on Saturday when she was relayed the tragic news that her nephew was lying unconscious at the Colonial War Memorial Hospital (CWMH) in Suva. The 26-year-old is the latest road accident victim.

“I found it really odd when I was told that Jo did not sleep at home because he had left with his cousin (my son) to go to Nasinu but he told his cousin to take the lead back home and that he was going to come later,” she said.

“One thing was for sure that whenever Jo gets drunk, he will always ensure that he returns home to sleep because he was not someone who could just sleep anywhere.

“We were advised that he was in a coma and he was at CWMH but when we reached the hospital about 7.30am on Saturday, Jo had died.”

Mrs Vakaloloma could not contain her emotions while reminiscing her nephew’s life during an interview with this newspaper at their Tamavua Village home in Suva yesterday.

“He grew up in a very tough family environment, but he was a very responsible and cheerful child.”

The road death toll now stands at 24 compared with 20 for the same period last year. |