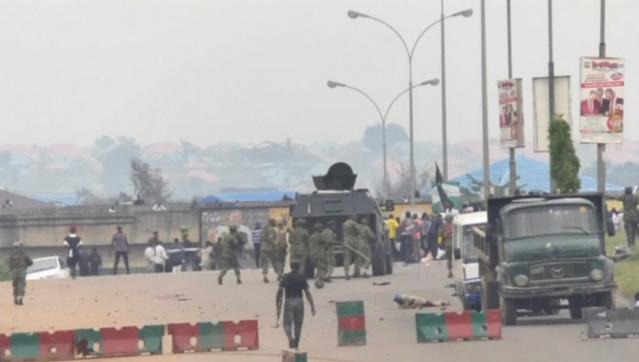 Soldiers behind moving armored vehicle advancing on Islamic Movement of Nigeria protesters are seen in this still image taken from a video shot on October 29, 2018 on the outskirts of Abuja, Nigeria. Reuters TV via REUTERS

ABUJA (Reuters) – Nigeria’s military shot at Shi’ite Muslim protesters marching in the capital Abuja on Monday to demand the release of their religious leader, according to a Reuters witness.

Hundreds of members of the Islamic Movement of Nigeria (IMN) took part in the march for the release of Ibrahim Zakzaky, jailed since December 2015 when security forces killed hundreds of members in a crackdown on the group, estimated to have 3 million followers.

Some victims were lying on the ground on a road in the area of Kugbo on Abuja’s outskirts, the witness said, adding that some had thrown stones at the military before the shooting began. The condition of those on the ground was not immediately clear.

An army spokesman did not immediately respond to phone calls seeking comment.

In April, police fired bullets and tear gas canisters during days of protests by IMN, wounding at least four.

The violent repression of IMN and the detention of its leader have drawn accusations that President Muhammadu Buhari’s government is abusing human rights. The group says Zakzaky must be freed after a court ruled his detention without charge illegal.

The crackdown has sparked fears that IMN could become radicalised, in much the same way that the Sunni Muslim militant group Boko Haram turned into a violent insurgency in 2009 after police killed its leader.