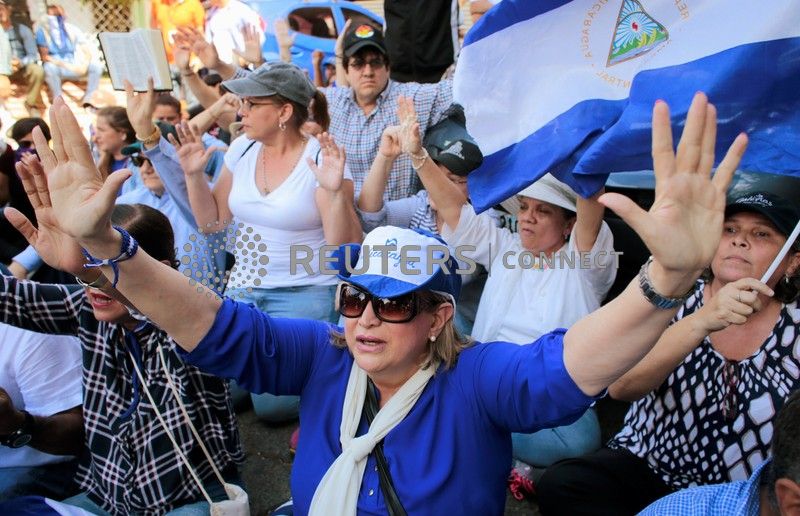 Demonstrators shouts slogans during a march to mark the one year anniversary of the protests against Nicaraguan President Daniel Ortega's government in Managua, Nicaragua April 17, 2019.REUTERS/Oswaldo Rivas

MANAGUA (Reuters) – Hundreds of Nicaraguans opposed to President Daniel Ortega took to the streets on Wednesday in protests deemed illegal by the government and several dozen were arrested, according to an opposition group, although police denied anyone was detained.

A large number of police could be seen in riot gear surrounding the site of the main protest in the capital, Managua, where they impeded some 200 Nicaraguans as the peaceful, flag-waving protesters shouted pro-democracy slogans.

A Nicaraguan journalist also said he was detained briefly and video of his live broadcast appeared to show police taking him away.

National police insisted in a brief statement on Wednesday night there were no incidents or arrests “during the course of unauthorised activity” on Wednesday and denounced unspecified news stories it described as “inaccurate and slanderous.”

The statement said 15 people were “notified and immediately transported to their homes” but did not provide further information.

Police did not respond immediately to a request for additional information.

Anti-government protests began a year ago this week, evolving into a broader resistance movement and the sharpest test of Ortega’s grip on power since he took office for a second time in 2007. A Cold War adversary of the United States, the 73-year-old Ortega served a single term as president in the 1980s.

A total of 67 protesters were detained by police during the day according to the opposition Blue and White National Unity movement, which organised the protests in defiance of a ban issued by the government on Tuesday.

The government said on Tuesday it had released more than 600 prisoners, emphasizing that none of them had been held for political reasons.

Journalist Abixael Mogollon, from Nicaraguan digital outlet Aritculo 66, was covering the protests on Wednesday and said he was among those detained but was later released.

“I was in the midst of a live broadcast and (the police) ordered me to stop and then they took me into a vehicle and began hitting my chest and legs,” Mogollon told Reuters.

He said four women who had been arrested were also released but not before he witnessed them also being struck, threatened and their possessions taken from them.

At least 324 people have been killed in the civil unrest since then, according to the Inter-American Commission on Human Rights, an autonomous arm of the Organization of American States.

Ortega has called the protests an illegal plot by his adversaries to oust him, while critics have accused him of employing authoritarian tactics and seeking to entrench a family dynasty in the Central American nation.

The government prohibited the opposition march on the grounds that those behind it were involved in “grave disturbances to public order” in past protests.