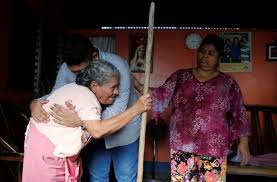 Martin Jarquin, who was arrested for participating in a protest against Nicaragua's president Daniel Ortega's government, embraces his grandmother after being released from La Modelo Prison in Managua, Nicaragua March 15, 2019.REUTERS/Oswaldo Rivas

MANAGUA (Reuters) – The Nicaraguan government on Friday released a second group of prisoners following demands by the opposition for more detainees to be freed before political dialogue to broker a way out of a national crisis continues. The interior ministry said 50 people – which the opposition considers political prisoners – had been released, […]