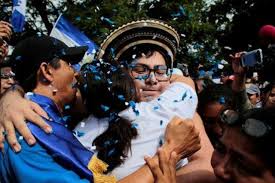 Oppostion leader Yubrank Suazo, who according to local media was arrested for participating in a protest against Nicaraguan President Daniel Ortega's government, is greeted by neighbors after being released from La Modelo Prison, in Masaya, Nicaragua June 11, 2019.REUTERS/Oswaldo Rivas

MANAGUA (Reuters) – Nicaragua said on Tuesday it had released 56 political prisoners under a new law that frees people who were arrested in recent anti-government protests, while protecting police and others who violently clamped down on the demonstrations. The release of the 56 opposition leaders follows Monday’s release of 50 rank-and-file protesters by the […]