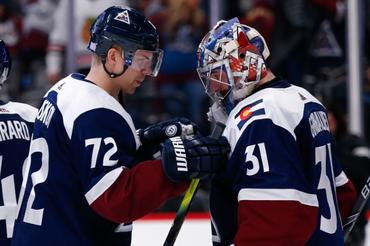 Joonas Donskoi and Nazem Kadri had two goals apiece, Mikko Rantanen had a goal and three assists in his first game in more than a month, and the Colorado Avalanche beat the Chicago Blackhawks 7-3 in Denver on Saturday night.

Patrick Kane, Brandon Saad and Dominik Kubalik had goals, and Corey Crawford finished with 13 saves in relief of Robin Lehner for the Blackhawks, who played without defenseman Duncan Keith due to a groin injury.

Rantanen missed 16 games with a lower-body injury sustained at St. Louis on Oct. 21. He sat out the third period Saturday for what is believed to be precautionary reasons.

Provorov’s sixth goal of the season gave Philadelphia its second overtime victory over the Canadiens this season, as the Flyers also needed the extra frame in a 3-2 result over Montreal on Nov. 7.

The victory caps an outstanding November for the Flyers, who led the NHL with 24 points in the month by earning points in 14 of 16 games (10-2-4). The Flyers have won four straight games and are unbeaten (5-0-1) over their last six contests.

Thomas Greiss and Semyon Varlamov combined for 39 saves in a rare two-goalie shutout for host New York, who snapped a three-game losing streak by beating Columbus.

Greiss made the first nine saves before exiting for undisclosed reasons with 5:54 left in the opening period. The combined shutout is the third in Islanders history and the first since April 4, 1998. Greiss, who exited with a 1-0 lead, is the first Islanders goalie to ever earn a win after playing less than one period.

Anders Lee scored early in the first period, and Mathew Barzal scored late in the second for the Islanders, who went 0-2-1 on a three-game West Coast road trip. Goalie Elvis Merzlikins made 25 saves for the Blue Jackets, who have alternated wins with losses over the last six games.

Dylan Gambrell and Timo Meier also scored goals and Tomas Hertl had two assists for San Jose, which tied a franchise record with 11 wins in the month of November. The Sharks also extended their NHL record of winning when allowing two goals or less to 45 games.

A battle between the best and worst teams in the NHL had the predictable outcome, as Alex Ovechkin notched a hat trick and added an assist to lead Washington past host Detroit.

The Capitals lead the NHL with 43 points and have won five of their last seven games. Detroit has a league-worst 17 points and is winless in its last nine, including seven straight regulation losses.

T.J. Oshie and Tom Wilson also scored for the Capitals, and Ilya Samsonov made 25 saves. Robby Fabbri and Luke Glendening scored for the Red Wings, and Jonathan Bernier stopped 29 shots.

St. Louis got third-period goals from Ivan Barbashev, Mackenzie MacEachern and Jaden Schwartz to win its third straight game, knocking off visiting Pittsburgh, which has lost two in a row.

Justin Faulk and Nathan Walker also scored for St. Louis, which is 5-1-1 in its past seven. Jordan Binnington stopped 29 of 31 Penguins shots.

Sam Lafferty and Kris Letang scored for Pittsburgh, which lost its second straight. Matt Murray made 22 saves. The Penguins played mostly with five defensemen. Brian Dumoulin was helped off the ice in the first minute after St. Louis’ Zach Sanford fell on his right leg as the two pursued the puck behind the Pittsburgh net. There was no information on his status.