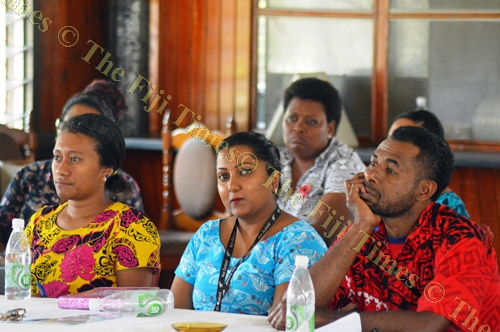 NGO representatives in the North during their forum in Labasa. Picture: LUKE RAWALAI

REPRESENTATIVES of more than 20 non-government organisations (NGOs) from Macuata converged in Labasa recently to discuss ways forward to issues faced by communities within the province.

Organised by the Macuata Provincial Council with assistance from the Adventist Development and Relief Agency (ADRA), the forum is the first of its kind to bring NGOs together.

Facilitator Makereta Tawa, who is also ADRA’s Vakarauwai project co-ordinator, said the forum was a platform for NGOs to talk about what they did and avoid the replication of programs in communities.

Ms Tawa said the forum was the first of its kind, adding they planned to meet on a regular basis.

“This is just to ensure that programs by NGOs are in sync and there is no replication of work in communities,” she said.

“It is common for at least two or more NGOs carrying out the same conservation programs in the same communities, but once they learn of their counterparts’ work they can then plan and work on other programs that they can implement.”

Meanwhile, the council’s provincial conservation officer Makelesi Raciri said through the forum they aimed to find ways in which they could align NGOs’ work with their five platforms based on good governance, wellbeing, economic empowerment of the iTaukei, conservation of natural resources and building of resilient communities.

Ms Raciri said they aimed to identify areas where they could align themselves with NGOs to avoid the replication of programs in communities and villages.