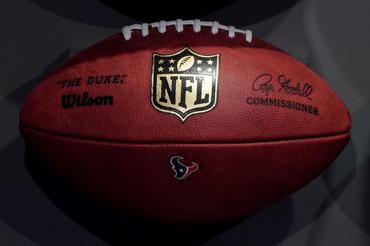 FILE PHOTO: The NFL logo is pictured on a football at an event in the Manhattan borough of New York City, New York, U.S., November 30, 2017. REUTERS/Carlo Allegri/File Photo

When NFL teams vote on the proposed rule change to adopt an alternative to the onside kick on Thursday, the language will be different from what was first introduced.

The rule would permit teams to attempt a fourth-and-15 untimed play from their own 25-yard line twice per game in regulation.

A team can also call timeout before the snap of the ball on the untimed down and change its decision to execute a kickoff.

At least 24 owners must vote to approve the rule on Thursday for it to pass.