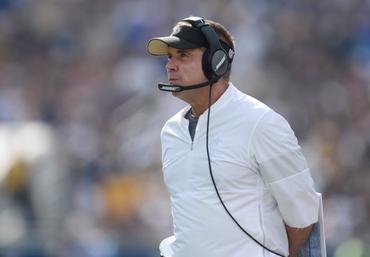 Saints coach Sean Payton is not tipping his hand at quarterback, refusing to name backup Teddy Bridgewater as the starter Sunday when New Orleans visits the Seattle Seahawks.

Before the team’s first practice of the week at the University of Washington, Payton said the team is considering its QB options before taking on the 2-0 Seahawks. Veteran starter Drew Brees is out at least six weeks with a torn ligament in his right thumb.

Bridgewater entered last week’s loss at Los Angeles and played the second half as the Rams pulled away. Asked whether third quarterback and do-it-all offensive dynamo Taysom Hill would be limited in his other roles since he’ll be elevated behind Bridgewater, Payton scoffed: “You’re assuming he’s the No. 2.”

—Staying the course despite scoring 10 points in eight quarters, the Miami Dolphins maintain support of Ryan Fitzpatrick as the starting quarterback.

Coach Brian Flores opened the door on Monday to a potential change to Josh Rosen but announced that he’ll ride with Fitzpatrick into Dallas for Week 3.

—Eli Manning displayed no bitterness during his first public comments after being demoted as starting quarterback of the New York Giants.

In fact, the 38-year-old Manning vowed to be a good teammate and help first-round pick Daniel Jones, who is replacing him as the team’s signal caller beginning with Sunday’s road game against the Tampa Bay Buccaneers.

—The Carolina Panthers practiced a second straight day without Cam Newton taking any snaps, but coach Ron Rivera said he isn’t ready to declare his starting quarterback out for Sunday’s road game against the Arizona Cardinals.

If Newton, who was in a walking boot on Tuesday after aggravating a left foot injury, is unable to play, Kyle Allen will start, Rivera has said.

The Jets originally estimated an absence of three to seven weeks. Mono in adults can be more serious because of the potential impact on internal organs.

—With early season injuries piling up, the Philadelphia Eagles opted to cancel practice and instead held a walkthrough.

His release clears room for defensive end Robert Quinn to be activated following a two-game suspension for violating the league’s policy on performance-enhancing drugs.

—If there were any doubt about Jalen Ramsey’s status for Jacksonville’s game against the Tennessee Titans on Thursday night, Jaguars coach Doug Marrone cleared it up: The disgruntled cornerback will play.

Marrone was involved in a shouting match with Ramsey on Sunday during the Jaguars’ 13-12 loss at Houston. Ramsey has asked to be traded.

Fisher sustained the injury Friday in practice, was listed as questionable for Sunday’s game against the Oakland Raiders and played only the first series before leaving the game. Cam Erving came in as his replacement.