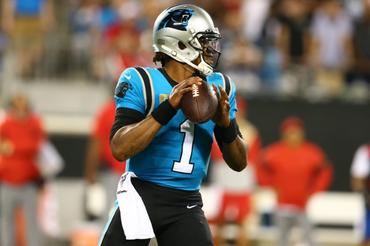 New York Giants head coach Pat Shurmur named Daniel Jones as the team’s starting quarterback for Week 3, sending Eli Manning to the backup role after an 0-2 start to the 2019 season.

“Eli and I spoke this morning,” Shurmur said Tuesday. “I told him that we are making a change and going with Daniel as the starter. I also talked to Daniel. Eli was obviously disappointed, as you would expect, but he said he would be what he has always been, a good teammate, and continue to prepare to help this team win games. Daniel understands the challenge at hand, and he will be ready to play on Sunday.”

The Giants play the Buccaneers (1-1) on Sunday in Tampa to kick off the Jones Era.

—Carolina Panthers quarterback Cam Newton sat out practice and could miss Sunday’s game against the Arizona Cardinals after aggravating a foot injury on Thursday.

Teammate Eric Reid said Newton has been in a walking boot.

Werder cited a source saying the timeline for Brees’ return won’t be known until after surgery, which will be performed by Dr. Steven Shinn.

—New York Jets quarterback Trevor Siemian is out for the season with a left ankle injury and likely will need surgery, coach Adam Gase announced.

Siemian, filling in for ill starter Sam Darnold, was injured in the second quarter of Monday night’s loss to the Cleveland Browns.

Second-year quarterback Luke Falk is expected to start Sunday against the Patriots.

—Patriots left tackle Isaiah Wynn was placed on injured reserve with a toe injury, putting him out until at least mid-November.

—Indianapolis Colts kicker Adam Vinatieri is working to clear the “demons” from his head amid a rocky stretch, but he told reporters he has not considered retiring, contrary to speculation in recent days.