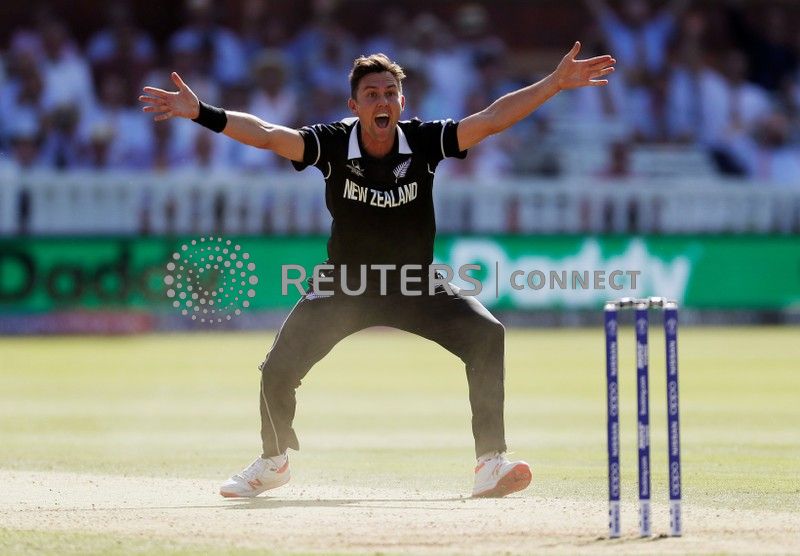 LONDON (Reuters) – Trent Boult’s hat-trick and a screamer of a catch from Martin Guptill would have graced any cricket match but there is no doubt that New Zealand’s World Cup hopes took a battering in Saturday’s loss to Australia.

The 86-run defeat was a second in a row at the tournament for the Black Caps and although they can still qualify for the semi-finals, the Lord’s loss will raise questions about their ability to beat top quality opposition.

They had their chance after reducing Australia to 92 for five but the defending champions rallied to make 243-9 and New Zealand’s response fizzled out at 157 all out with more than six overs still available to them.

Boult’s hat-trick was only the 11th in a World Cup match, and a first for a New Zealander, but the paceman was left ruing the fact that it came in Australia’s final over rather than when they were on the ropes.

“Any bowler dreams of getting three wickets in a row, but to do it out there in front of a big crowd at the home of cricket was pretty special,” Boult told reporters.

“It felt pretty good at the time, I would have liked it to be in the first over that’s for sure.

“I always want the ball, there’s no doubt about it. 90-5 and then them getting through to 240 odd, in my opinion, around that 200 mark would have been a very good score.”

Left-armer Boult ended up with figures of 4-51 and Lockie Ferguson and Jimmy Neesham also grabbed a couple of wickets apiece but the 29-year-old said the bowlers had to take their share of the blame for the defeat.

“I’m sure the boys are disappointed with the chase,” Boult said.

“From a bowling point of view, to let them get over 200 was frustrating. If we could have kept them under that, it makes it a whole different ball game.

“But they bowled well, used their bowlers well and pushed their run rate up very nicely and it was too much for us in the end.”

New Zealand could qualify for the last four even before they take on England in their final round-robin match in Durham on Wednesday if India beat the tournament hosts at Edgbaston on Sunday.

In Boult’s mind at least, however, the Australians are now favourites to retain the trophy they won by beating New Zealand in the final at Melbourne Cricket Ground in 2015.

“They are peaking nicely now,” he said. “Obviously, there are some quality sides here but it’s all about timing in my opinion and they are performing well. There are a couple of weeks left and they will be the ones to beat.”