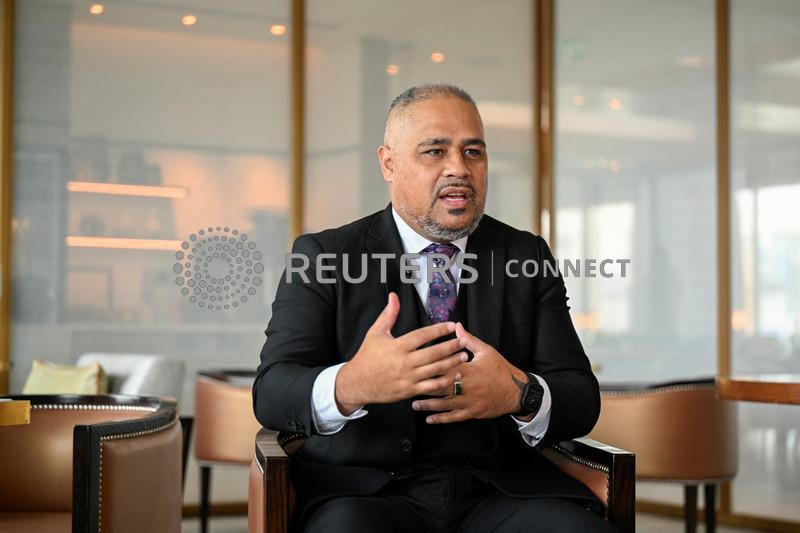 New Zealand's Minister of Defence Peeni Henare speaks during an interview with Reuters on the sidelines of the 19th Shangri-La Dialogue in Singapore June 11, 2022. REUTERS/Caroline Chia

SINGAPORE (Reuters) – New Zealand Minister of Defence Peeni Henare said on Saturday that Pacific island nations have the freedom to make their own decisions about cooperation with China, as Beijing seeks closer military ties with the strategically important region.

China signed a security pact with the Solomon Islands in April, alarming the United States, Australia and New Zealand, who fear a stepped-up military presence by Beijing.

Beijing has said that it is not establishing a military base in the Solomon Islands and that its goal is to strengthen security cooperation with Pacific island nations.

Henare told Reuters that New Zealand believed in the sovereignty of those nations, and that it was not in anyone’s interests to try to coerce a certain outcome.

“Our job is to support them, to make sure they make strong decisions for themselves,” Henare told Reuters on the sidelines of the Shangri-La Dialogue, Asia’s top defence meeting.

“We will continue to maintain that policy. … We can’t be paternalistic.”

Henare said he met with Chinese Defence Minister Wei Fenghe at a security summit in Singapore this week, where he reiterated the importance of the Pacific islands maintaining their independence.

“My point to them was very clear, that we support independence, we support sovereign nations and sovereign states, like the many in the Pacific,” he said.

“In our dialogue with them, they (China) were pushing that they … come in peace, that they want to look towards security and sustainability, prosperity across the Pacific,” he added.

The Solomon Islands and Fiji sent delegations to the summit and were scheduled to speak at sessions over the weekend.

The U.S. and its allies are concerned China’s closer ties with Pacific islands could mirror Beijing’s strategy in the South China Sea, where it has steadily built up its military presence in recent years.

China has begun upgrading Cambodia’s largest naval base, it emerged last week, in the latest sign of its military expansion in the region.

“It’s not by coincidence that I met with China to make sure we can hear each other out and be very direct,” he said.