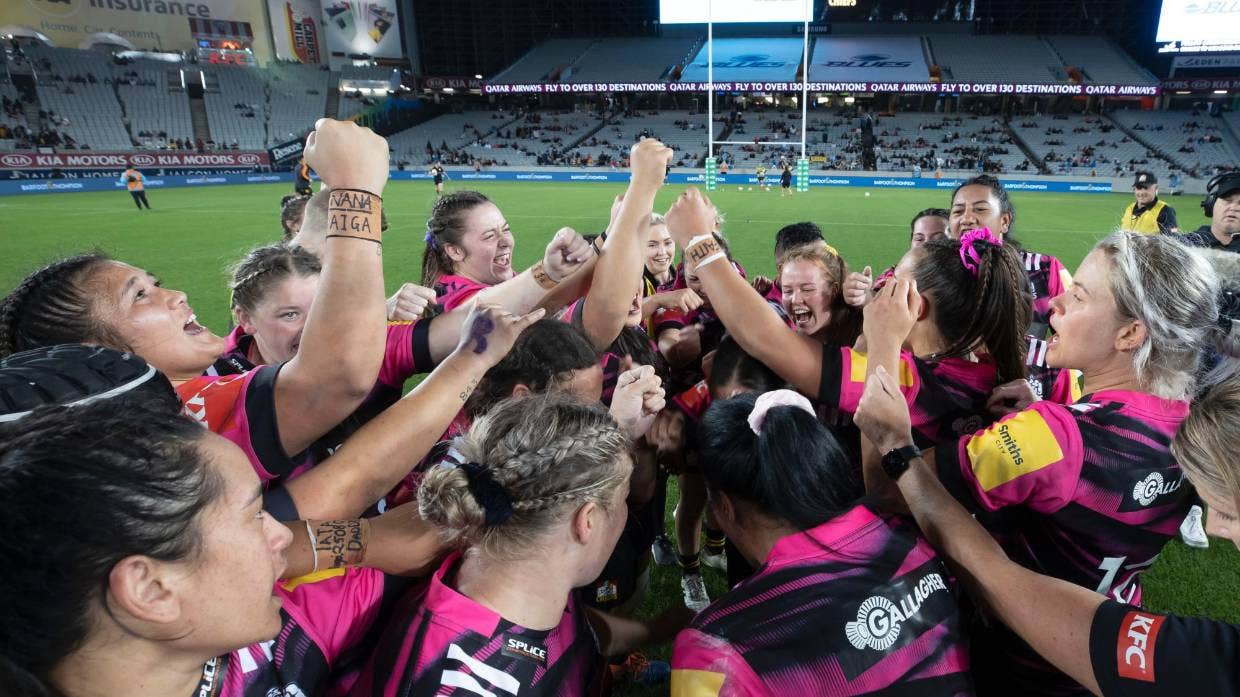 The Chiefs celebrate their win over the Blues in their historic fixture at Eden Park. Picture: PHOTOSPORT

And it is mindful its contracting model will need to be updated to suit.

Last Saturday’s historic fixture between Blues and Chiefs women’s teams put the state of play regarding a new competition in the spotlight.

NZR had hoped to have one up and running this year, ahead of the Rugby World Cup – which was set to be held in Auckland and Whangarei in September and October, but has since been postponed – but those plans were put on hold when the Covid-19 pandemic hit in 2020.

The governing body’s head of women’s rugby development, Cate Sexton, told Stuff on Thursday: “We will have a competition next year”.

“We’ve just got to work through what that looks like and who the teams will be in that competition.”

A four-team competition featuring sides aligned to the three North Island Super Rugby franchises, as well as one representing the South Island, would appear to be the most likely outcome, as signalled by NZR chief executive Mark Robinson in March.

But aside from noting it would be a “short, sharp” competition involving a final, Sexton said it was too early to get into specifics, including exactly which teams would be involved.

“There are internal discussions, obviously, that we are having, and I can’t really talk too much about that,” Sexton said.

“But our timeline is that by July, we’ll be able to announce the competition and who will be playing in it.

“There’s a bit of water to go under the bridge before we can do that, but I’m really excited that New Zealand Rugby is committed to that, and we’re just working on those details at the moment.”

Among the many details to be ironed out are the specifics regarding player contracts – both in terms of the commitment players will be asked to make and the pay they will receive in return.

Some challenges of semi-professionalism were laid bare by Black Fern Chelsea Alley this week, when she posted on Instagram about the struggle of playing rugby to the highest level possible while having to work at the same time.

But the launch of this new competition comes at a time when World Rugby has put firm plans in place regarding the international game, in the form of its new WXV competition, which will finally give the Black Ferns a consistent, expanded fixture list.

And Sexton believes those two developments will lead to proper professionalism sooner rather than later.

“I don’t think it’s that far off, really, because with the new global calendar, which will kick into play in 2023, and the domestic competitions, the Farah Palmer Cup and this new elite competition, that we want our players playing, the contracting model needs to reflect the commitments we’re asking of our players,” she said.

“So if you look at that in its entirety, it’s getting that way, and they are some of the conversations we’re having. We have really good relationships and consultation with the players association about this, because we’ve been aware of this for a while.

“We knew with this new global annual calendar, there would definitely be tests every year in two windows, so it does change the landscape, and we’re really conscious of that.

“We’re also very conscious of the wellbeing of our players, as we’re asking more of them as the game grows and there are more opportunities, so we really need to create that sustainable model for our players to thrive.

“That’s certainly a piece of the puzzle which is a work in progress, but it won’t be a long way away, I would imagine.”

The 2021 Farah Palmer Cup season is due to start on July 17, with the competition returning to a Premiership-Championship format after being split on North-South lines in 2020 in an effort to keep costs down as a result of Covid-19.

Players involved will not only be playing for places in the Black Ferns, who are hoping to have their first tests since 2019 at the end of this year, but for places in the teams for the new competition, which will hopefully be known by then, as well.

“I think people don’t realise how much a competition like that actually costs to run. There’s a lot of moving parts, so for NZR to say that it’s going to happen is great.

“I think the girls will be very excited, and it will also be a great lead-in for the Black Ferns for the World Cup next year, having that competition at the start of the year.”