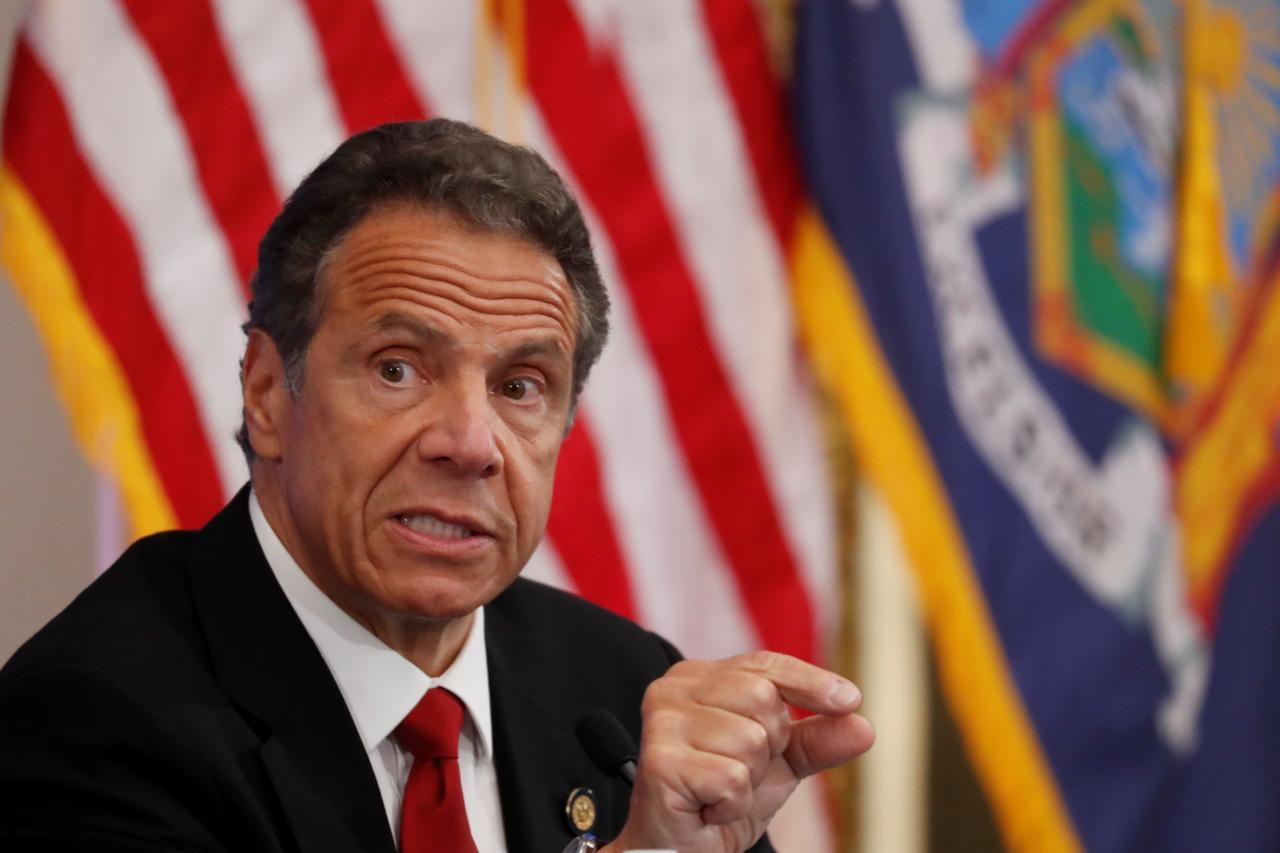 New York Governor Andrew Cuomo speaks inside of the New York Stock Exchange after earlier ringing the opening bell as the building opens for the first time since March while the outbreak of the coronavirus disease (COVID-19) continues in the Manhattan borough of New York, U.S., May 26, 2020. REUTERS/Lucas Jackson

As his state’s rates of hospitalizations and deaths drop, Cuomo, a Democrat who has sparred with Trump over the federal government’s pandemic response, wants to revive a shattered economy by undertaking major infrastructure projects. He told a daily briefing that he will meet with Trump, a Republican, on Wednesday in Washington to discuss a federal role in investments to modernize the nation’s bridges, roads and rail systems.

Elsewhere, beaches, fitness centers and hotels in Florida’s Broward County, including Fort Lauderdale, were given the green light to open on Tuesday with some restrictions. A New York City suburb that was home to one of the nation’s earliest coronavirus clusters took the first step in reopening its economy.

The moves came as some health experts warned that reopening too quickly could trigger outbreaks of COVID-19, the disease caused by the virus. Twenty U.S. states reported an increase in new cases for the week ended Sunday as the death toll nears 100,000, according to a Reuters analysis. Florida reported a nearly 6 percent increase, while New York registered a double-digit decline.

Noam Bramson, mayor of New Rochelle, New York, said most of his city’s economy was now able to reopen, albeit with restrictions. But he said the city, which went into a strict lockdown in March after an outbreak believed to be centered around a synagogue, would take a cautious stance and did not expect a quick return to normal.

“If we prematurely take this milestone as an invitation to return to business as usual that will be a very serious mistake,” Bramson said in a phone interview. “There are still active cases of COVID in our city and the region.”

Not all Americans were adopting such a careful approach.

In defiance of social-distancing guidelines, crowds gathered at the Lake of the Ozarks recreation area in Missouri on Monday’s Memorial Day holiday.

Revelers drank elbow-to-elbow, most without face coverings, and swimmers packed close together, according to social media reports. Officials in Missouri and neighboring Kansas urged participants to self-quarantine for 14 days.

“This reckless behavior endangers countless people and risks setting us back substantially from the progress we have made in slowing the spread of COVID-19,” St. Louis County Executive Sam Page said as Missouri’s COVID-19 cases rose 27 percent last week.

New York, the epicenter of the pandemic in the United States, is one of the few states to have a clear downward trend. At a daily briefing on Tuesday, Cuomo said 73 people died over the past 24 hours, the lowest daily toll since he started reporting figures over two months ago.

With that improvement, Cuomo has turned his attention to re-opening New York, which is part of an economic crisis — triggered by lockdowns on businesses and travel — that has cost tens of millions of American jobs.

To kickstart growth, Cuomo said he planned to accelerate major construction projects in his state, including the redevelopment of LaGuardia Airport and a renovation and expansion of Penn Station in New York City.

“This is one of the things I want to talk to the president about … You want to reopen the economy. Let’s do something creative, let’s do it fast, let’s put Americans back to work,” Cuomo said.