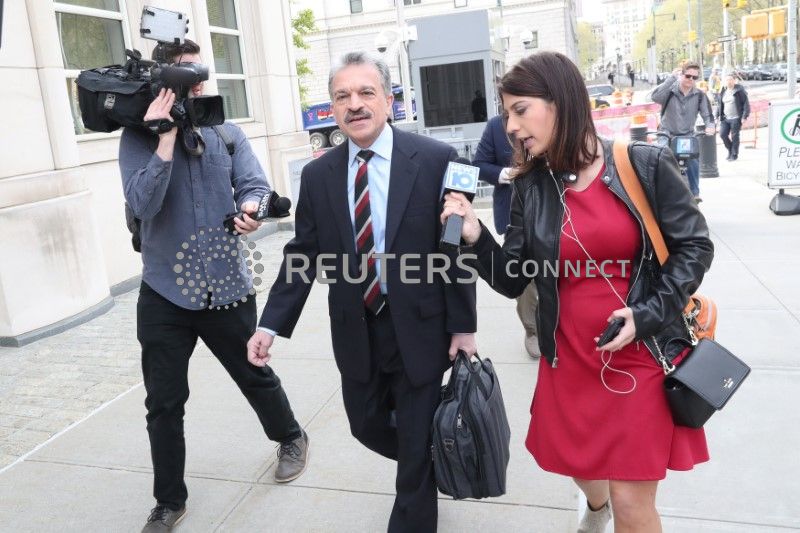 NEW YORK (Reuters) – Former self-help guru Keith Raniere was a “predator” who preyed on young women, including a 15-year-old girl, and turned them into sex slaves as part of a cultlike organization, a federal prosecutor told a jury at the start of his trial on Tuesday.

“The defendant took advantage of them emotionally and sexually,” Assistant U.S. Attorney Tanya Hajjar said in U.S. District Court in Brooklyn. “He sold himself as the smartest, most ethical person in the world. … He compared himself to Einstein and to Gandhi.”

But defense lawyer Marc Agnifilo told jurors that all the women joined Nxivm voluntarily and that Raniere was merely a tough taskmaster, not an abusive criminal mastermind.

“This is something these people signed up for,” Agnifilo said. “Control can be very bad. Control can also make Marines. Control can make gold medal winners.”

Raniere, 58, is accused of recruiting women to join his group, Nxivm, and then exercising total dominion over them – forcing them to have sex with him, restricting their diets and branding them with his initials.

“No one could challenge his authority,” Hajjar told jurors as Raniere listened from the defense table, wearing a blue shirt and gray sweater with his formerly shoulder-length hair cut short.

Raniere has pleaded not guilty to charges of sex trafficking, child pornography and other crimes and faces life in prison if convicted.

Some of his alleged “slaves,” as well as members of his inner circle, are expected to testify at the trial, which could last up to six weeks.

While prosecutors have not said who will take the witness stand, former “Smallville” star Allison Mack and Seagram liquor heiress Clare Bronfman have already pleaded guilty to related crimes, as well as three other women accused of involvement in Raniere’s scheme.

Prosecutors said on Tuesday that Raniere’s victims included three Mexican sisters, one of whom was only 15. The government plans to introduce explicit photographs of the youngest sister seized from Raniere’s computer as evidence.

Another sister was confined to a room for two years, Hajjar said.

Agnifilo, however, said the woman had a consensual relationship with Raniere and was free to leave at any time.

The trial caps a bizarre saga for Raniere, who was arrested in March 2018 after fleeing to Mexico with Bronfman.

Nxivm, which started under another name in 1998 and is pronounced “Nexium,” was based in Albany, New York, and at one time operated numerous self-improvement centers across North and Central America.

In 2015, prosecutors say, Raniere established a sorority within Nxivm known as DOS, an acronym for a Latin phrase that roughly means “master of the obedient female companions.”

The subgroup included “slaves” who were expected to obey “masters” in a pyramid-like structure, with Raniere standing alone at the top as the only man.

The slaves were required to submit “collateral” that could be used as blackmail material, such as nude photos.

Agnifilo told jurors the collateral was used to confirm the women’s commitment but was never intended to be released.