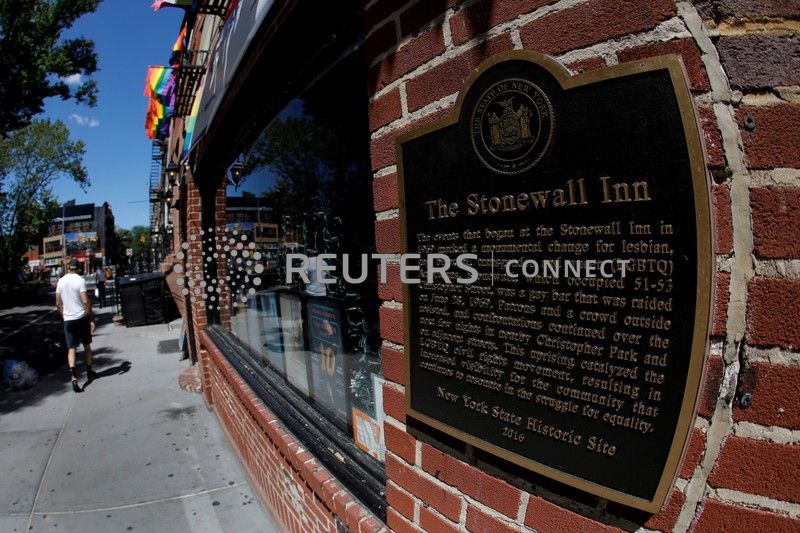 NEW YORK (Reuters) – The New York Police Department on Thursday apologised for the first time for the raid on the Stonewall Inn gay bar 50 years ago and anti-gay laws of the time that gave rise to the modern LGBT rights movement, describing them as discriminatory and oppressive.

Gay rights advocates welcomed the apology, which they had sought from the NYPD for years.

Police raided the Stonewall, a Greenwich Village tavern, in the early morning hours of June 28, 1969. At the time, homosexuality was criminalised and most gay bars, including the Stonewall, were operated by organised crime.

Patrons of the bar fought back that night and several days thereafter, leading to unprecedented demonstrations for the rights of lesbian, gay, bisexual and transgender (LGBT) people.

Activists memorialized the first anniversary of the Stonewall rebellion with what they called Christopher Street Liberation Day, starting an annual gay pride tradition that is now celebrated around the world.

The NYPD had resisted previous calls to apologise, but Commissioner James O’Neill chose Thursday to tell a gathering of gay rights advocates that this month’s World Pride events in New York for the 50th anniversary of Stonewall marked the right moment.

“What happened should not have happened,” O’Neill said. “The actions taken by the NYPD were wrong, plain and simple. The actions and the laws were discriminatory and oppressive, and for that, I apologise.”

Organizers expect some 4 million people to visit New York later this month for World Pride. New York’s parade will be held on June 30.

Former Commissioner William Bratton refused to apologise three years ago while acknowledging the raid was a “terrible experience.”