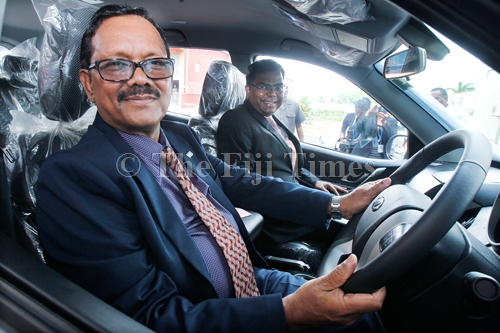 Chairperson of the Electoral Commission, Suresh Chandra on the wheel with Indian High Commissioner to Fiji, Vishva Sapkal during the handing over of the new vechile to the Fiji Election office. Picture: ATU RASEA

THE Indian Government through its High Commission in Suva is planning to gift four brand new vehicles to the Fijian Elections Office (FEO) to assist with its logistical works in the upcoming general election. In handing over the first vehicle to the FEO, India’s High Commissioner to Fiji Vishvas Sapkal said the Indian Government was happy to provide assistance to the FEO as Fiji heads to elections.

“We are a committed development partner of Fiji. As you know, India is the largest practising democracy in the world, and we have a record of about 60 years conducting peaceful, fair, transport and free elections,” Mr Sapkal said.

Chairman of the Fijian Electoral Commission Suresh Chandra, while receiving the key to the vehicle, said the handover was a timely one.

“An election poses to be the largest logistics exercise that any country would conduct at this time, such a massive operation must always be supported by the presence of logistics equipment such as vehicles for transport,” he said.

“Considering the requirement to conduct elections in a day, as well as the requirement of the logistics of the Electoral Commission in travelling to and from other engagements, such an important gesture by the Indian Government will go a long way.”

Mr Chandra said the commission was always positively assisted by the Government of India, and the four vehicles they planned to give would add to the 10 vehicles the Indian Government handed over to the FEO in 2014.