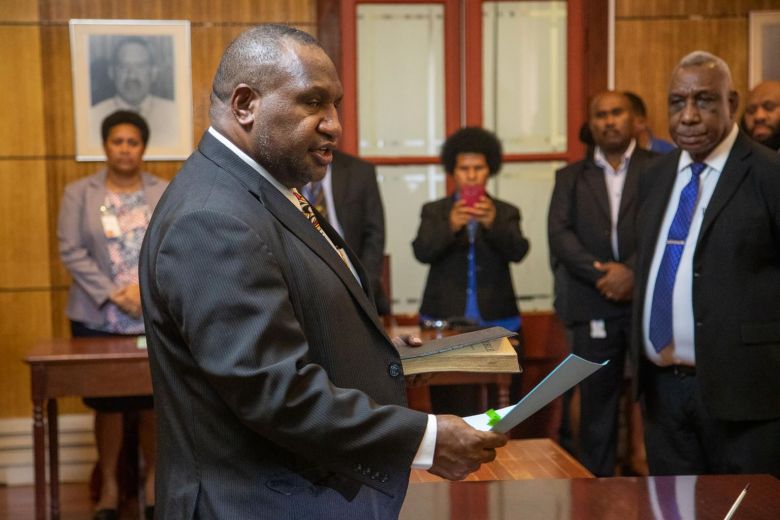 James Marape, a former finance minister who became leader after winning a vote in parliament, put some of the world’s biggest resources companies on notice over a perceived lack of wealth flowing from their projects back to communities.

Marape, who hails from PNG’s poor but gas-rich highlands, had even quit the government in April after questioning a deal with France’s Total, which allows it, Oil Search Ltd and ExxonMobil Corp to begin work on a US$13 billion plan to double gas exports.

He rode a wave of discontent over how taxes and royalties from a US$19 billion Exxon-led LNG project were delayed and distributed, among other projects, into the top office.

“At the moment our resource laws are outdated … we will look into maximizing gain from what God has given this country from our natural resources,” he said in his first address to parliament as prime minister.

“I have every right to tweak and turn resource laws for my country, then it will empower my citizens as well,” he told the chamber to cheers and applause.

“I truly want this country to be the richest black Christian nation on the planet,” he added.

Exxon said it looked forward to working with the new leadership. Oil Search said it did not comment on politics.

Total’s Chairman and CEO Patrick Pouyanne told journalists on the sidelines of the company’s shareholders meeting in Paris on Wednesday evening that he would not comment on the political situation in Papua New Guinea.

“Our accord has been negotiated… the (former) prime minister very well defended the interest of his country during the discussions. It is a major project that would need some more work before it is launched,” Pouyanne said.

Newcrest, which runs the Lihir operation and is also developing one of the world’s largest untapped gold reserves in a joint venture with South Africa’s Harmony Gold, said it looked forward to working with Marape’s government.

After he was sworn in, Marape told a news conference he would focus on “taking back our economy” and proposed an overhaul of mining, forestry and fishing laws.

He said any changes to laws would not be retrospective.

“We are not here to break legally binding project agreements,” he told reporters when asked if he would consider reviewing the Exxon LNG deal.

But he added: “If we find any project agreement … that has not fully complied with proscribed provisions of law, then we are open to reviewing and scrutinising them.”

Santos Ltd, an Australian gas producer, said it did not expect project delays due to the leadership change in PNG.

“I don’t hear anybody talking about stopping or slowing down new developments,” said Santos CEO Kevin Gallagher, referring to the P’nyang gas agreement, a farm-in deal being negotiated to expand the Exxon-led project.

“It’s about getting the terms right. I think that’s fair enough. We just have to work through that process,” he told reporters in Brisbane.

“I believe he is rational and seems to lean towards respecting and grandfathering current agreements,” said Isikeli Taureka, chairman of Kinabank and a former oil and gas executive at Chevron and InterOil, said in a text message.

The political uncertainty has knocked almost 6% from shares in Oil Search, an Australian partner in large LNG projects in PNG, since the challenge to O’Neill gained traction last week.

Oil Search shares climbed in early trade, but turned negative after Marape’s election to close down 0.3 percent in a broader market that also closed lower.

Many PNG residents listened and watched the political drama unfold on television, according to media reports, but were more sanguine about the outcome than politicians in the capital.

“I don’t know at the moment,” said Julie Sakol, a nurse at Mendi hospital in the highlands who watched Marape’s speech.

“They were a few good words, but after that, how he will actually proceed, we will wait and see,” she said.