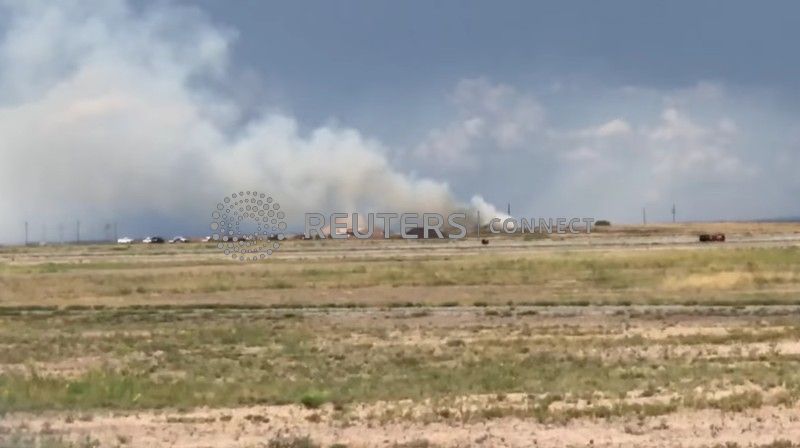 Smoke from an explosion is seen in Roswell, New Mexico, U.S., June 5, 2019 in this picture obtained from social media. Roswell Today/via REUTERS

(Reuters) – Several firefighters were injured on Wednesday, two seriously, in an explosion at a building in Roswell, New Mexico, where fireworks were being stored for the city’s annual July Fourth celebrations, police and city officials said.

The blast occurred shortly after noon at a building on the grounds of the Roswell International Air Center, a commercial airport on the southern outskirts of the town, said Todd Wildermuth, a spokesman for the city.

He said about a dozen firefighters were in and around the building “doing some preparation work” for the city’s upcoming July Fourth Independence Day fireworks display when the explosion occurred.

He said two firefighters suffered serious injuries and were taken to local hospitals. A number of others who sustained minor injuries were treated on the scene.

The cause of the blast was under investigation, he said. The fireworks storage building, at the far west end of the airport property, is far enough away from the airport itself that flight operations were not affected, Wildermuth said.

Roswell, a city of about 48,000 residents in southeastern New Mexico about 200 miles southeast of the state capital, Albuquerque, is perhaps best known for the reported crash of an unidentified flying object in 1947 near what was then known as the Roswell Army Air Field.