New lease of life for Damudamu 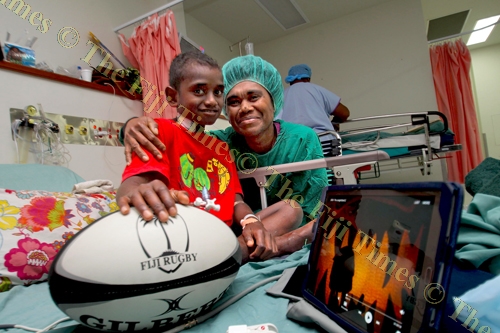 Lorima Damudamu (left) of Namosi, is joined by his mum Ana Miriama by his bedside at CWM hospital in Suva. Picture: ELIKI NUKUTABU

A MOTHER’S prayer was answered after her son was given a new lease of life after a successful heart surgery at Suva’s Colonial War Memorial Hospital on Monday.

Ana Meriama, who resides in Navunikabi Village in Namosi, said she was grateful to the doctors who had managed to save her son, Lorima Damudamu. Lorima was diagnosed with rheumatic heart disease (RHD) when he was eight years old which affected a valve in his heart.

The surgery was performed by the visiting surgeons from the Starship Children’s Hospital in New Zealand through the Heart 4 Kids organisation.

“He fell sick often and then we decided to take him to CWM Hospital for a check-up. After doctors did the tests, it was known to us that he had RHD,” Ms Meriama said.

“After this we returned to our village and it was a real struggle as we had to bring him over every three months for check-ups.

“On the first check-up, we were told that the doctors could not operate on Lorima since his heart was enlarged and overseas treatment was needed.” She said the visiting team came and arranged to have Lorima’s operation.

“We are very lucky that we did not have to go overseas for this operation as this would be very costly. They have done the operation free of charge.

“I want to thank everyone involved in getting the doctors here to conduct the operations. It has saved many lives. My son is okay now and recovering well.”