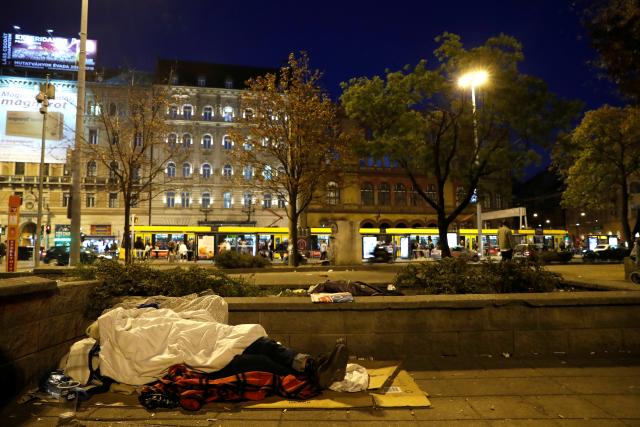 A homeless woman lies on the street in Budapest, Hungary, October 14, 2018. REUTERS/Bernadett Szabo

BUDAPEST (Reuters) – A tough new law that bans homeless people from sleeping on Hungary’s streets came into force on Monday, prompting criticism from human rights groups who say it is inhumane.

The law, which follows a constitutional amendment approved in June that brands rough sleeping a crime, empowers police to order homeless people to move into shelters. If they disobey three times within a 90-day period, the police can detain them and destroy their personal belongings.

Prime Minister Viktor Orban’s right-wing government has said the new law aims to provide proper living conditions for the homeless and has set aside money to help them.

But Gabor Ivanyi, who leads the group Oltalom (Shelter) which operates homeless shelters with 600 beds in Budapest, said the government had failed to conduct a proper dialogue with charity organizations before it passed the legislation.

“This law serves the aim of scaring the homeless to prompt them to flee (the streets),” Ivanyi said. “They are scared and don’t know what to do now. We don’t know what will happen tomorrow.”

Homeless people had all but disappeared on Monday morning from underpasses in central Budapest where there would normally be plenty.

The government says it has allocated about 9 billion forints ($32.17 million) to homeless care in its 2018 budget plus an additional 300 million forints to expand shelter capacities.

“We believe we need to give additional help and not additional rights to homeless people,” Bence Retvari, state secretary, told reporters on Saturday according to a video posted on HirTv website.

Retvari said further help would be available from Monday, without elaborating.

On Sunday around 500 protesters demonstrated against the law outside the Hungarian parliament.

“I believe this is shameful… that they criminalize the impossible and helpless situation that these people are in,” said Agnes Merenyi, one of the demonstrators.

An activist group called “Varos Mindenkie” (which means “the city is for everyone”) said in a statement: “(The constitutional amendment) allows the authorities to persecute the most helpless people with a wider range of police tools from Oct. 15.”

Last month the European Parliament voted to sanction Hungary for flouting EU rules on democracy, civil rights and corruption in a move the Orban government said was an attempt to punish Budapest for its anti-migration stance.

Orban’s Fidesz party won a third consecutive four-year term on a landslide in an election in April.