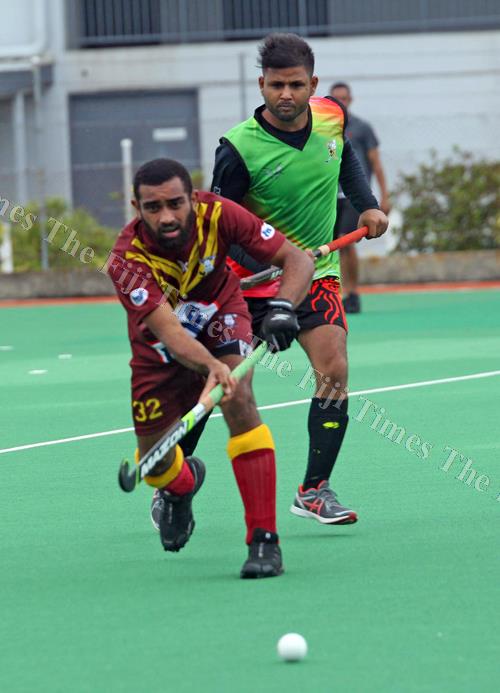 Tristan Tora, left, of Ventures on attack against Stingers in the mens final of the 24th Geotech Drilling Eastgate Memorial Hockey Tournament at the National Hockey Centre in Suva on Sunday, September 30, 2018. Picture: JONACANI LALAKOBAU

STINGERS Hockey Club is the new champion of the Geotech Drilling Marist Eastgate Memorial Hockey Tournament after defeating Ventures 2-1 in a thrilling final at the National Hockey Centre yesterday.

Ventures took the early lead in the first half but Stingers equalised soon after.

“We had one focus in mind and that was to win this tournament,” said Stingers coach/player Shaun Corrie.

Stingers attack dominated in the second half before putting the final nail in the coffin.

“We kept our structure, kept our shape and executed when we had the chance,” Corrie said.

Ventures had knocked out defending champions Marist in the semi-final and looked the favourite to win.

“Playing the Ventures Hockey Club is always a tough game and they are champions in their own right,” he said.

“It was hard leading up to the tournament with some of our girls coming in from the West, and hats off to Stingers as they have been training really really hard throughout the season and took us to the wire,” Fraser said.

“We just stuck to our game plan and kept the ball maybe 95 per cent of the time but it was a testament to their defence that we got the win in the dying minutes of the game.”