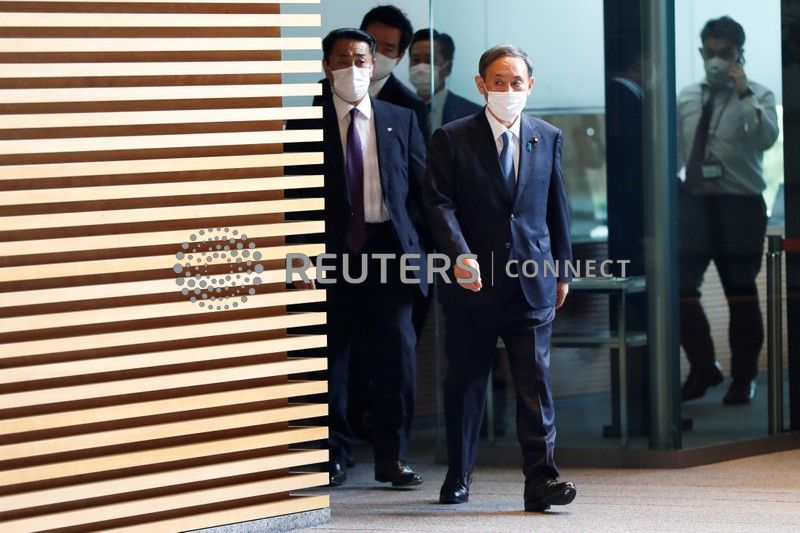 TOKYO (Reuters) – The freshly minted head of the ruling Liberal Democratic Party and incoming Japanese prime minister, Yoshihide Suga, who has vowed to continue the policies of his predecessor Shinzo Abe, was set to name his new cabinet on Wednesday.

Most of Abe’s ministers will retain their posts or take up different roles in the cabinet, local media said. Here are profiles of the most important members of the incoming administration. They have not yet been formally sworn in, but their new roles have been widely reported by the public broadcaster NHK and other domestic media.

In 2008, Aso was elected ruling Liberal Democratic Party leader and hence, premier, but the long-dominant party suffered a historic election defeat in 2009, languishing in the opposition for the next three years.

The grandson of a former premier, Aso mixes policy experience with a fondness for manga comics and a tendency towards gaffes.

As health minister in Abe’s outgoing cabinet, he was in the limelight in the early days of the coronavirus pandemic before Economy Minister Yasutoshi Nishimura, 57, a former trade official, emerged as point person on virus policy.

In 2015, Kato, a father of four, was handed the portfolio for boosting Japan’s rock-bottom birth rate, a task that met little success. He is a former finance ministry official.

He also served as trade minister under Abe when the latter returned to power in 2012, tackling talks on the Trans-Pacific Partnership free trade pact.

Educated at the University of Tokyo and Harvard, Motegi was first elected to the lower house in 1993 from the then-opposition Japan New Party and joined the LDP in 1995.

Defence Minister Kishi, 61, is Abe’s younger brother. He was adopted soon after birth into his maternal family line by the childless eldest son of former premier Nobusuke Kishi, Abe’s grandfather – a fact he reportedly didn’t find out until he was preparing for university.

A graduate of Keio University with an economics degree, he worked in a trading firm until 2002, spending time in the United States, Australia and Vietnam. He was first elected to parliament in 2004 and has served as State Minister for Foreign Affairs and Parliamentary Vice-Minister of Defense.

He shares many of his brother’s conservative views, including the goal of revising the pacifist Constitution.

Administrative Reform Minister Kono, 56, has a reputation as a maverick but has toed the line on key Abe policies, including a stern stance in a feud with South Korea over wartime history. He served as defence minister in Abe’s last cabinet.

Educated at Georgetown University and a fluent English speaker, he previously served as foreign minister and defence minister.

He has differentiated his conservative stances from those of his father, former chief cabinet secretary Yohei Kono, who authored a landmark 1993 apology to “comfort women”, a euphemism for women forced to work in Japan’s wartime military brothels.

Kajiyama, 64, became minister of economy, trade and industry (METI) in October 2019 after his predecessor stepped down following accusations of election law violations just a month after taking office.

The son of a politician whom Suga looked up to as a mentor and first elected to parliament in 2000, Kajiyama began his professional career at the Power Reactor and Nuclear Fuel Development Corp, now known as the Japan Atomic Energy Agency.

METI oversees national energy policy, which remains in turmoil nearly a decade after the Fukushima disaster shut most of the country’s nuclear reactors.

Koizumi, 39, who retains his post as environment minister, is the son of charismatic former premier Junichiro Koizumi and often mentioned as a future premier, although for now considered too young by many in the LDP.

He shares some of Abe’s conservative views and has paid his respects at Tokyo’s controversial Yasukuni Shrine for war dead.

Koizumi has projected a reforming image on the basis of efforts to cut Japan’s backing for coal, the dirtiest fossil fuel, but has typically taken care not to offend party elders.

Hashimoto, 55, who is retaining her post as Olympics Minister, was named after the Olympic flame when she was born days before Japan hosted the Summer Olympics in 1964 and has taken part in seven Olympics and in two sports.

Hashimoto has been put in the difficult and unprecedented position of overseeing an Olympic Games postponed for a year by the coronavirus, until 2021.

Hashimoto said this month that the Games must be held “at any cost” in 2021.

A graduate of Tokyo University who received a master’s degree from Harvard, the 67-year-old Kamikawa has been named the justice minister. She was first elected to the lower house of parliament in 2000.