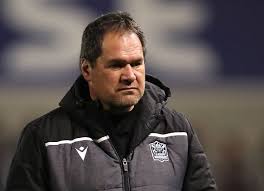 (Reuters) – Australia’s incoming new coach Dave Rennie will end his spell with Glasgow Warriors next week, a month sooner than planned, after the Pro14 side confirmed Scotland’s forwards coach Danny Wilson would replace him as head coach.

New Zealander Rennie was tasked with leading the Wallabies to the 2023 Rugby World Cup after being appointed Michael Cheika’s replacement in the wake of their quarter-final exit last year.

Rennie was set to start with the Wallabies in July but with the Pro14 league season suspended indefinitely due to the COVID-19 pandemic the Warriors decided now was the best time for Wilson to take over and free Rennie of his obligations.

“With sport in Australia planning to return soon, making the change now will also allow Dave to begin his new role as head coach of the Australian national team,” Warriors managing director Nathan Bombrys said on the club’s website.

“We’re grateful to Dave for everything he has done for our club over the past three seasons and particularly for how he has been supportive of the current situation, as well as his willingness to share his vast coaching knowledge with all of our coaches.”

Wilson was set to join after the Six Nations — which was also suspended — and shadow Rennie for the rest of the season. He will now take the reins on Monday.