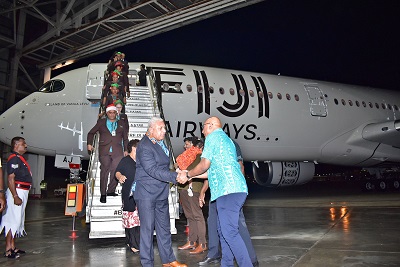 AUSTRALIAN visitor arrivals into Fiji have plateaued and dipped over the past five years but Fiji Airways brand new Airbus A350 aircraft and Qantas entering the market should see a hike in numbers.

This is the view of Fiji Hotel and Tourism Association chief executive oficer Fantasha Lockington.

“We can see from the FBOS figures that Australian arrivals have gone down a little bit,” Mrs Lockington said.

“We might see a difference with Fiji Airways’ new Airbus A350 operating out of Sydney because of its bigger capacity and increased comfort.

“And we could probably see an increase in Australian numbers, we are certainly hoping for it, with Qantas putting their 737s in out of Sydney as well.”

Mrs Lockington said the impact of Fiji Airways’ A350 and Qantas 737s on Australian arrivals would not be known until March or April next year.

The Association of South Pacific Airlines, however, said Fiji Airways decision to lease two Airbus A350s when its biggest source market was stagnant was perplexing.

ASPA secretary-general George Faktaufon said Australian tourists accounted for 40 per cent of total visitor arrivals into the country and statistics over the past five years were “not encouraging”.

“To bring that airplane at a time when there is likely to be a global recession and a recession in Australia is worrying,” said Mr Faktaufon.

“For the first time in Australia, over the last two years — inbound travel has exceeded outbound traffic.

“That means there is no growth in the outbound market and that will have an impact on us who depend on Australian tourists.”

Mr Faktaufon said while Fiji was a preferred destination in terms of safety and stability, increased competition from Asian destinations like Bali, Malaysia, Thailand and also within the Pacific was a concern.

” Fiji Airways did not respond to questions about Australian arrivals figures. When quizzed about lease and loan repayments for all aircraft including the Airbus A350, the airline said it could not respond.

“We are unable to discuss our confidential financial arrangements with lessors,” said an airline spokesperson.

“Fiji Airways was able to get an excellent financial deal for our A350 aircraft.”

Questions sent to Tourism Minister Premila Kumar regarding the comments made by Mr Faktaufon on November 27 and again yesterday, remain unanswered.