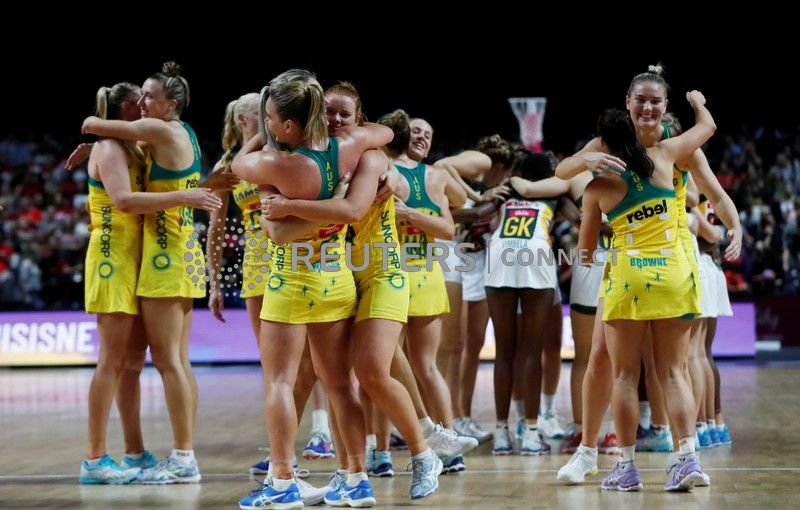 (Reuters) – Holders Australia will face New Zealand in the netball World Cup final after both emerged victorious from two thrilling semi-finals in Liverpool on Saturday.

Australia beat South Africa 55-53 to stay on course for a 12th crown from 15 editions of the tournament since 1963.

Commonwealth champions England began badly, going 5-0 down, and despite deafening home support helping them into a narrow halfway lead, the Silver Ferns were more clinical.

“I can’t put into words what just happened,” New Zealand attacker Maria Folau, a constant thorn in England’s side, said.

“The discipline was there and it was all about keeping to our structure and processes. When players needed to stand up, all seven stood up. We didn’t get caught chasing.”

It was a bitter disappointment for England coach Tracey Neville, whose brother Phil recently suffered a similar fate as coach of the England’s women soccer team that lost in the World Cup semi-final to the United States.

“I think New Zealand came out really strong and we didn’t learn our lessons quick enough and we ended up chasing the game which we have not done all tournament,” a deflated Neville said.

“But that was a class performance by New Zealand. We made some basic errors. They did a great job on us.”

Victory did not come easily for top-ranked Australia who surged to an eight-goal lead at halftime but had to stave off a determined comeback by the Proteas in the last two quarters.

“It’s amazing. It wasn’t pretty but a win is a win. We go again and we’re so excited,” Australia’s Liz Watson, named player of the match, said.

“I think it came down to heart and passion. We kept getting back into it… we are so pumped. We’ll go and watch the game later. Whoever we play will be a great match.”

The final takes place on Sunday, while England face South Africa for the bronze medal.