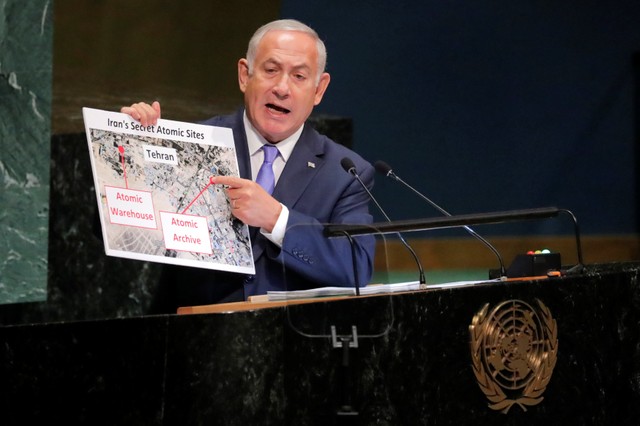 UNITED NATIONS (Reuters) – Israeli Prime Minister Benjamin Netanyahu described on Thursday what he said was a secret atomic warehouse in Tehran and accused Europe of appeasing Iran as he sought to rally support for U.S. sanctions against the Islamic Republic.

Addressing the United Nations General Assembly, Netanyahu showed an aerial photograph of the Iranian capital marked with a red arrow and pointed to what he said was a previously secret warehouse holding nuclear-related material. He argued this showed Iran still sought to obtain nuclear weapons, despite its 2015 agreement with world powers to curb its program in exchange for loosening of sanctions.

Netanyahu spoke 4-1/2 months after U.S. President Donald Trump withdrew from the accord, arguing it did too little to rein in Tehran’s nuclear ambitions and triggering the resumption of U.S. economic sanctions on Iran.

Netanyahu said the site contained some 15 kilograms (33 pounds) of radioactive material that has since been moved and called on the U.N. atomic agency to inspect the location immediately with Geiger counters.

“I am disclosing for the first time that Iran has another secret facility in Tehran, a secret atomic warehouse for storing massive amounts of equipment and materiel from Iran’s secret nuclear programme,” Netanyahu said.

“The world will only laugh loudly at this type of false, meaningless and unnecessary speech and false shows,” Qassemi said.

Netanyahu did not identify the material nor specifically suggest that Iran had actively violated the nuclear deal.

An outspoken opponent of the deal, Netanyahu has previously made allegations about Iran’s nuclear activities that are difficult or impossible to verify, including presenting a cartoon bomb to the General Assembly in 2012 warning of how close Tehran was to producing a nuclear device.

In April, Netanyahu presented what he said was evidence of a large secret archive of documents related to Iran’s clandestine nuclear weapons programme at a different site in Tehran.

He said Israeli agents removed vast amounts of documents from that site. At the time, Iran said the documents were fake.

In a speech in which he said relatively little about efforts to achieve peace with the Palestinians, Netanyahu said Iran had since begun moving items out of the second site.

“Since we raided the atomic archive, they’ve been busy cleaning out the atomic warehouse. Just last month they removed 15 kilograms of radioactive material. You know what they did with it?” he said. “They took it out and they spread it around Tehran in an effort to hide the evidence.”

He said Iranian officials still had a lot of work to do because there were some 15 shipping containers full of nuclear-related equipment and materials stored at the second site.

“This site contained as much as 300 tonnes – 300 tonnes – of nuclear-related equipment and materiel,” he said.

Under the nuclear deal struck by Iran and six major powers – Britain, China, France, Germany, Russia and the United States – Tehran agreed to limit its nuclear programme in return for relief from U.S. and other economic sanctions.

The International Atomic Agency (IAEA) has repeatedly said Tehran was abiding by its commitments to the deal, formally called the Joint Comprehensive Plan of Action (JCPOA), including in a document reviewed by Reuters on Aug. 30.

France, Britain, Germany, China and Russia have stayed in the pact, vowing to save it despite the restoration of U.S. sanctions and this week discussing a barter mechanism they hope may allow Iran to circumvent the U.S. measures.

Netanyahu criticized Europe for doing so in unusually harsh language that evoked European nations’ initial failure to confront Nazi Germany in the 1930s.

“While the United States is confronting Iran with new sanctions, Europe and others are appeasing Iran by trying to help it bypass those new sanctions,” Netanyahu said.

A U.S. official, speaking on condition of anonymity, said the United States is aware of the facility Netanyahu announced and described it as a “warehouse” used to store “records and archives” from Iran’s nuclear programme.

A second U.S. intelligence official called Netanyahu’s comments “somewhat misleading. First, we have known about this facility for some time, and it’s full of file cabinets and paper, not aluminium tubes for centrifuges, and second, so far as anyone knows, there is nothing in it that would allow Iran to break out of the JCPOA any faster than it otherwise could.”

“In Lebanon, Iran is directing Hezbollah to build secret sites to convert inaccurate projectiles into precision-guided missiles, missiles that can target deep inside Israel within an accuracy of 10 metres (yards),” he said.

The IAEA, Iran and Hezbollah were not immediately available for comment.

The Israeli military released a video clip and photos of what it said were Hezbollah Shi’ite militia rocket building sites in Lebanon, shortly after Netanyahu’s address.