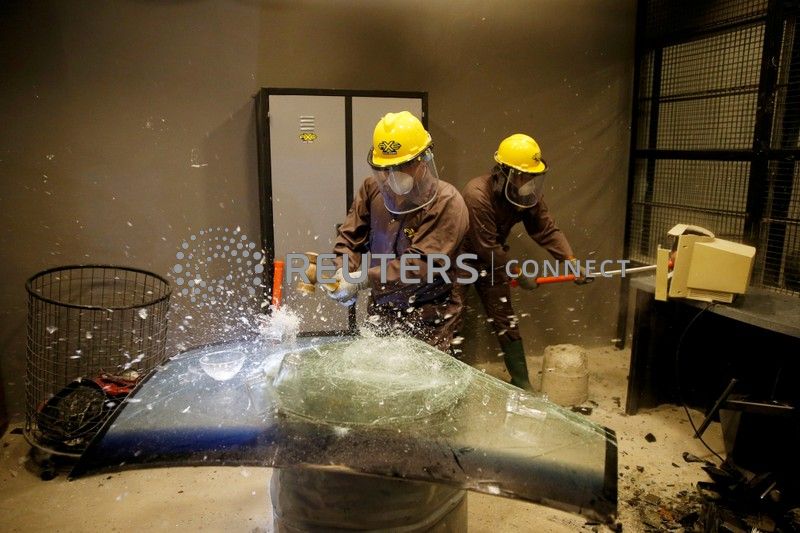 Jordanian people smash items at AXE Rage Room where they can express their anger in an entertaining way in Amman, Jordan, April 17, 2019. REUTERS/Muhammad Hamed

AMMAN (Reuters) – In an underground room in Amman, a small group of Jordanians swing giant hammers at an old television, computer and printer, wrecking the machines, and then hit a car windscreen, shattering the glass into tiny pieces.

In the “Axe Rage Rooms”, people can vent their anger and frustration by demolishing old items as well as smashing plates and glasses.

“This is simply a place to break things and vent,” co-founder and general manager Ala’din Atari said. “A place where people come when they’re looking for a new experience… walking into a room with various items which they can break.”

So-called rage rooms have opened around the world, drawing visitors who want let their hair down and unleash some anger.

At the “Axe Rage Rooms”, where the experience costs $17, participants wearing protective suits and helmets wrote the issues bothering them on a blackboard – “ex-girlfriends”, “boss” and “all boyfriends”, the words becoming the targets of their anger.

Atari said his venue, which has seen about 10 clients a day in the month since it opened, had a space for couples, where the pair enter two rooms separated by a reinforced glass window.

“I wanted to try something new and…it was great,” said Ayla Alqadi, 23, after chucking old kitchenware at the window – behind which stood a friend.

“I felt like I had extra energy, it was a way to channel all the negativity inside, everything you feel inside you can release here.”