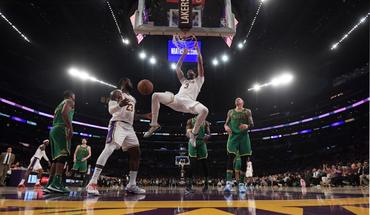 The historic rivals went back-and-forth throughout the game, and right down to the wire. The Celtics took a 110-108 lead with 1:17 remaining when Jaylen Brown, who scored 20 points, knocked down a 3-pointer.

Missed shots on both ends set a final 37 seconds that took several minutes due to a handful of officiating reviews and a technical foul assessed to Celtics coach Brad Stevens.

James’ fadeaway jumper with 30.4 seconds remaining gave Los Angeles the lead for good, with Davis making three free throws over the final 12 seconds to seal it.

Kyle Lowry had 16 points, 11 assists, seven rebounds and five steals for the Raptors, who have defeated the Pacers three times this month. The Pacers were without guard Victor Oladipo, who had a sore back.

Serge Ibaka added 15 points and 15 rebounds for the Raptors, who have won 17 of their past 18 games. The Raptors’ 46-point margin of victory marks the largest in franchise history.

The Thunder got rolling in the second quarter, answering a Spurs run with 16 consecutive points to jump ahead. That stretch, like most of the game, came from a balanced scoring effort.

Luguentz Dort, a rookie on a two-way contract, came up big for Oklahoma City with two big baskets in the 16-0 run, including a 3-pointer to finish off the stretch, and put the Thunder up 52-45.