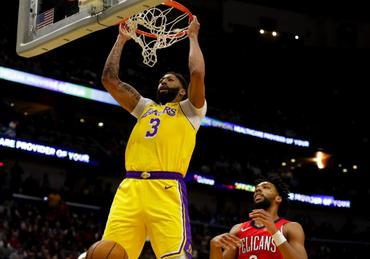 ANTHONY Davis scored 41 points in his return to New Orleans, and the Los Angeles Lakers won their ninth straight game, beating the Pelicans 114-110 on Wednesday night.

Davis was roundly booed whenever he touched the basketball in the city where he played his first seven seasons before demanding a trade from New Orleans, which sent him to the Lakers in July.

Jrue Holiday had 12 assists and 29 points, but just four in the second half, as the Pelicans squandered a 16-point, third-quarter lead. Brandon Ingram, one of three players Los Angeles traded along with a group of draft choices for Davis, had 23 points and 10 rebounds.

The Clippers were led by 24 points and 10 rebounds from Harrell, and 24 points from Lou Williams. Moe Harkless scored just five points, getting the start in place of Kawhi Leonard, but provided a win-sealing block of Jaren Jackson Jr.’s shot in the final seconds that would have tied the score.

Jonas Valanciunas posted game highs of 30 points and 16 rebounds for Memphis. Rookie guard Ja Morant endured a slow scoring start, but he scored nine of his 20 points late in the fourth quarter, and dished a game-high 11 assists for the night.

Alec Burks scored six of his 23 points in a fourth-quarter flurry as Golden State won for just the second time at home all season.

Eric Paschall scored a team-high 25 points, and both Burks and Omari Spellman recorded double-doubles for the Warriors, who had lost three straight and 10 of their previous 11 games. Burks had a nice all-around game with 10 rebounds and seven assists. Spellman produced 13 points and a game-high 11 rebounds.

With a hot start and a strong third quarter fueled by their starting lineup, Portland picked up a blowout win over visiting Oklahoma City.

It was a balanced scoring effort for Portland in its return home from a 2-4 road trip, led by 27 points from Damian Lillard. CJ McCollum added 22 points, Hassan Whiteside 21 points and 16 rebounds, and Carmelo Anthony 19 points on 9-of-11 shooting.

Abdel Nader came off the Oklahoma City bench to score a team-high 23 points. Chris Paul added 16 points as the Thunder lost for the fourth time in their past five games.

Bradley Beal scored 35 points and made four 3-pointers, and Thomas Bryant tied a season high with 23 points and added nine rebounds as Washington gave up most of a 21-point lead but held on to win at Phoenix.

Ish Smith tied a season high with 21 points and had seven assists, and Davis Bertens had 16 points, including four 3-pointers, for the Wizards, who rebounded from two of their lowest-scoring games of the season by shooting 57.3 percent and making 19 treys.

Devin Booker had 27 points and eight assists, Ricky Rubio had 18 points, and Dario Saric, Cam Johnson and Cheick Diallo had 17 points apiece for the Suns, who had eight players in double figures.

Giannis Antetokounmpo posted his 18th consecutive double-double to start the season, leading Milwaukee past visiting Atlanta for its ninth win in a row.

Antetokounmpo scored 30 points and added 10 rebounds and four blocked shots. He is the first player since Hall of Famer Bill Walton to start a season with 18 straight double-doubles. The Bucks also got 16 points from Khris Middleton, who returned from a seven-game absence caused by a left thigh contusion.

Atlanta was led by Jabari Parker, who had a career-high 25 points in the first half and finished with a season-high 33 and 14 rebounds. Trae Young added 29 points and four rebounds.

Kemba Walker scored a season-high 39 points in his return from a neck sprain as host Boston held off Kyrie Irving-less Brooklyn.

Jaylen Brown had 22 points and 10 rebounds as six Celtics scored in double figures. Boston won for the third time in its last five games.

The Nets also placed six scorers in double figures, led by Garrett Temple and Joe Harris with 22 and 21, respectively. Despite hitting 21 3-pointers as a team, Brooklyn saw its four-game winning streak end.

Charlotte finally figured out how to close a game, riding a season-high 19 points from Bismack Biyombo to a victory against visiting Detroit.

The Hornets, who dropped three games by fewer than 10 points in a four-day span last week, had help on Detroit’s botched final possession, hanging on to snap a five-game losing streak.

PJ Washington scored 17 points, Devonte’ Graham tallied 16 points and Miles Bridges had 15 for the Hornets, who have defeated the Pistons twice this month in home games. Graham added a career-high 15 assists. For Detroit, Griffin posted 26 points, Kennard notched 16 points, and Andre Drummond had 14 points and 21 rebounds.

Andrew Wiggins poured in 26 points as visiting Minnesota defeated slumping San Antonio to capture its second straight game on the road and its first win in the Alamo City since 2013.

Karl-Anthony Towns scored 23 points and took 14 rebounds for the Timberwolves, while Keita Bates-Diop added 16 points, Okogie had 11, and Gorgui Dieng and Jarrett Culver each scored 10 points for Minnesota.

San Antonio, which has lost five straight games at home, missed seven of its last eight shots from the floor over the final four minutes. LaMarcus Aldridge led the Spurs with 22 points, and DeMar DeRozan scored 20.

Evan Fournier scored 19 of his season-high 30 points in the first half as Orlando recorded its first road victory, topping Cleveland.

Fournier made four 3-pointers to highlight his performance for the Magic, who lost their first seven road games before winning the finale of their four-game trek. Jonathan Isaac and Terrence Ross each scored 16 points, and Mo Bamba made all five of his 3-point attempts to match Markelle Fultz with 15 points.

Collin Sexton scored 20 points on 8 of 14 shooting while playing in his 100th consecutive game to begin his NBA career. Cedi Osman scored 14 points and Tristan Thompson added 13 for the Cavaliers, who fell for the eighth time in the last nine games.