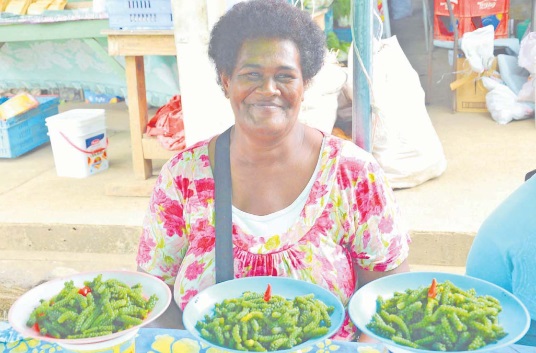 Widow is a word Ranadi Nayacaqu never dreamed would describe her one day.

But while reeling from the aftermath of Severe Tropical Cyclone Winston’s rage in the province of Ra, where the monster storm heaped havoc, she lost her husband to a fatal asthma attack.

Life grew bleak and having to fend for her family without support became a reality she had to deal with it.

To survive, the stay-at-home mum decided to sell at the Rakiraki market.

“My husband was the sole breadwinner of the family so when he passed away, I had to look for a way to support my three children who were still schooling,” Nayacaqu said.

“We struggled but we survived. Now two of my children are married and my life has moved on.”

The crew from this newspaper caught up with the soft-spoken Burelevu, Saivou woman selling nama (sea grapes) she harvested the previous day from the reef off Volivoli’s coast.

“To get nama, I catch the bus from where I stay in Naboutolu, get off at the Volivioli road junction and walk a few kilometres to the coastline.

At the beach I walk for a bit more to get to the nama patch,” she said.

“It’s a tiring job but I have to do this for the sake of my family.”

Nayacaqu said she was concerned about the exploitation of nama in Ra, caused by excessive and improper seaweed harvesting methods.

“When I gather nama, I make sure, I pick out the small branches carefully without uprooting the entire strand from the reef,” she said.

“This is important so that the nama is able to regenerate and we can have enough of the seaweed for everyone in years to come.”

As a result of this exploitation by some people, she claimed nama gatherers now had to venture further out to sea to collect the marine delicacy.

“Since the closure of our sugar mill, business has been very slow.

Nevertheless, life has to go on,” she said.

Nayacaqu spends alternative weekdays at the market and pays a stall rate of 85 cents a day.